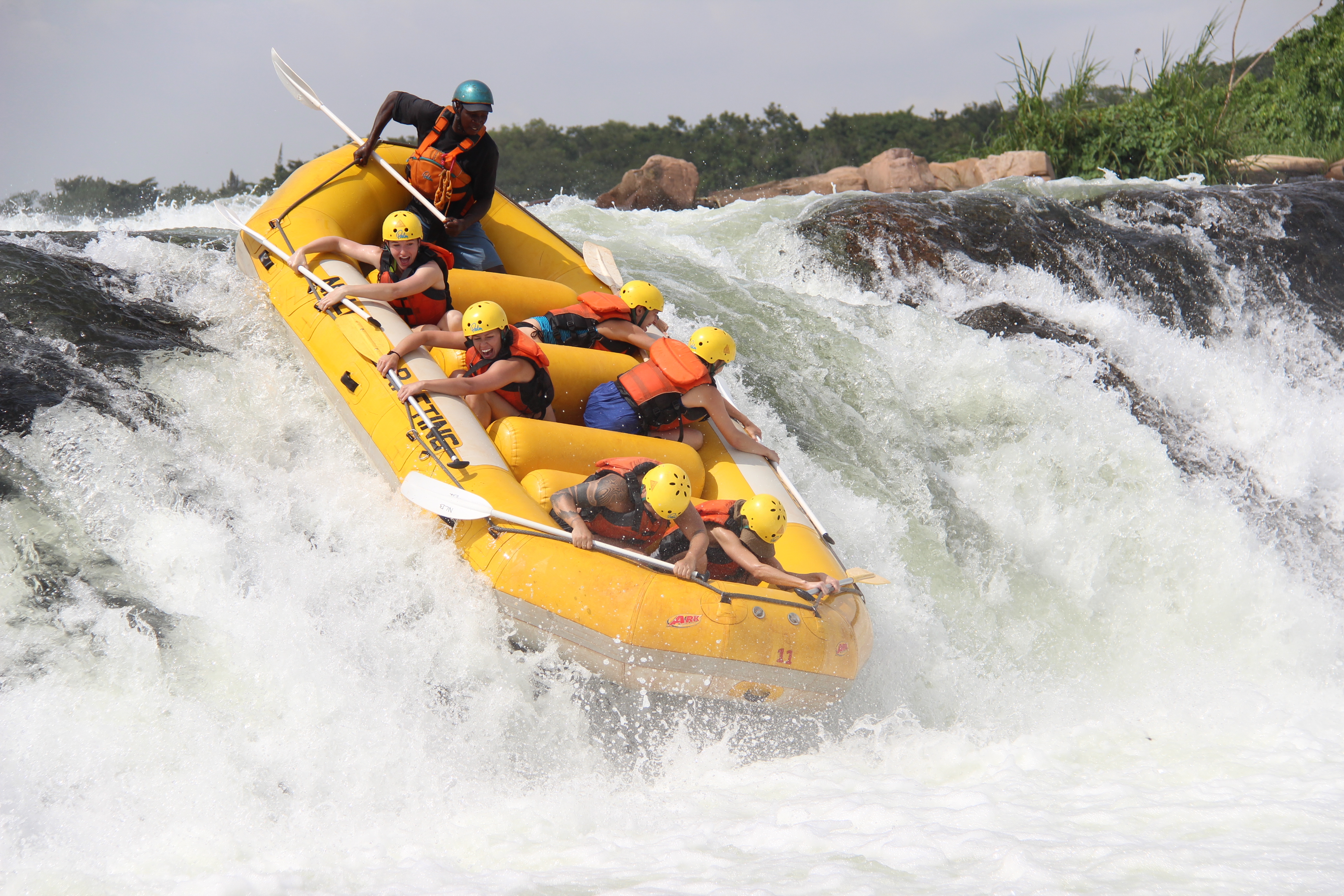 Whitewater rafting on the Nile was terrifying. For a minute. Then it was SUPER FUN!

There is a city called Jinja about an hour’s drive to the east of where I’m staying in Iganga. Jinja is substantially more developed than the surrounding rural areas and it hosts tourists, missionaries, and an ex-patriate community. The city sits on the northern edge of Lake Victoria and claims ownership as “the source of the Nile.” 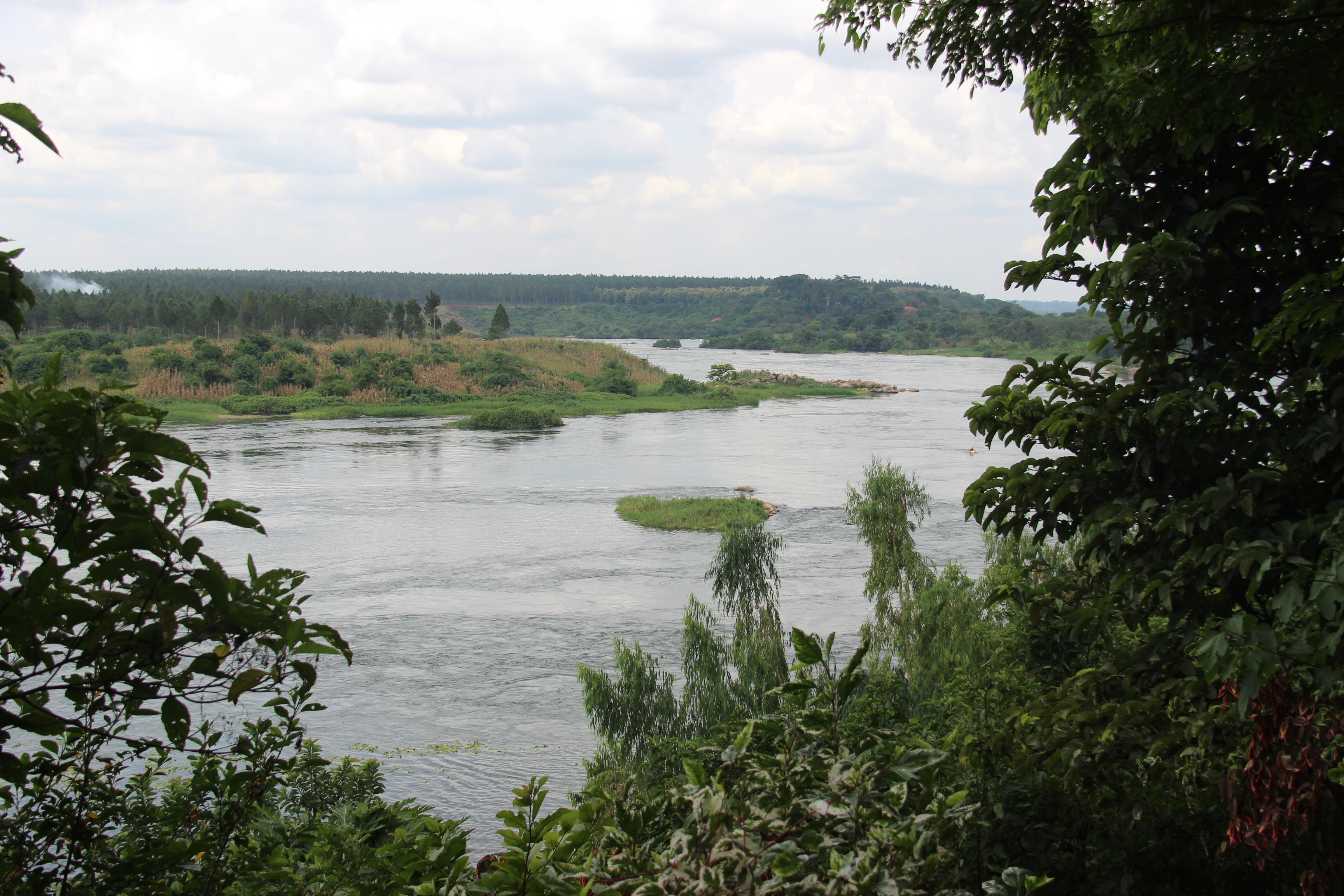 Flowing north out of Lake Victoria, the White Nile is a stretch of the river that is expansive, relatively deep and, in places, fast-flowing. It is aptly named because of its whitewater rapids. Now, coming from Colorado, these are a different kind of rapids than what I’m familiar with. In Colorado, the rivers are icey, rocky, and shallow. And really, really fast moving. The White Nile’s rapids are over enormous, smooth rocks that create huge waves and drops. Immediately after the rapids, the river returns to a gentle, leisurely flow, often so slow that you have to paddle to make any forward progress.

The temperature is also different than in Colorado. My only rafting experience at home was at summer camp near Steamboat Springs. I don’t have a great memory of rafting, other than that it was COLD. Cold air and cold water—and there’s no way to warm up. In Uganda, the air temperature is like 75 degrees at 9am, warming to mid-80s by the afternoon. The water temp in Lake Victoria and the Nile is like pool water. It’s certainly warmer than the Boulder Reservoir in the summertime, but it’s about the same brownish, muddy color.

The night before rafting, I stayed at a camp outside of Jinja. It took a half hour by boda to get there, and I arrived just before dark. The camp, like many things here, looked like it was straight out of a movie set. It was made up of a handful of buildings that included several long dormitory-style facilities, a centralized washroom/toilet building, some smaller, private shelters, and a large open-air reception/restaurant/bar/lounge that overlooked a lake. There was also a pool, mountain bike rentals, hiking, and according to a sign pointing downhill, a rope swing. Connecting each of the structures and points of interest was a network of shoulder-high hedges straight out of Alice in Wonderland. The main gathering area even came with its own Cheshire Cat that paraded across the bar and napped with one eye cracked, watching everyone. From what I gathered, a South African guy ran the place and hosted tourists all year round. 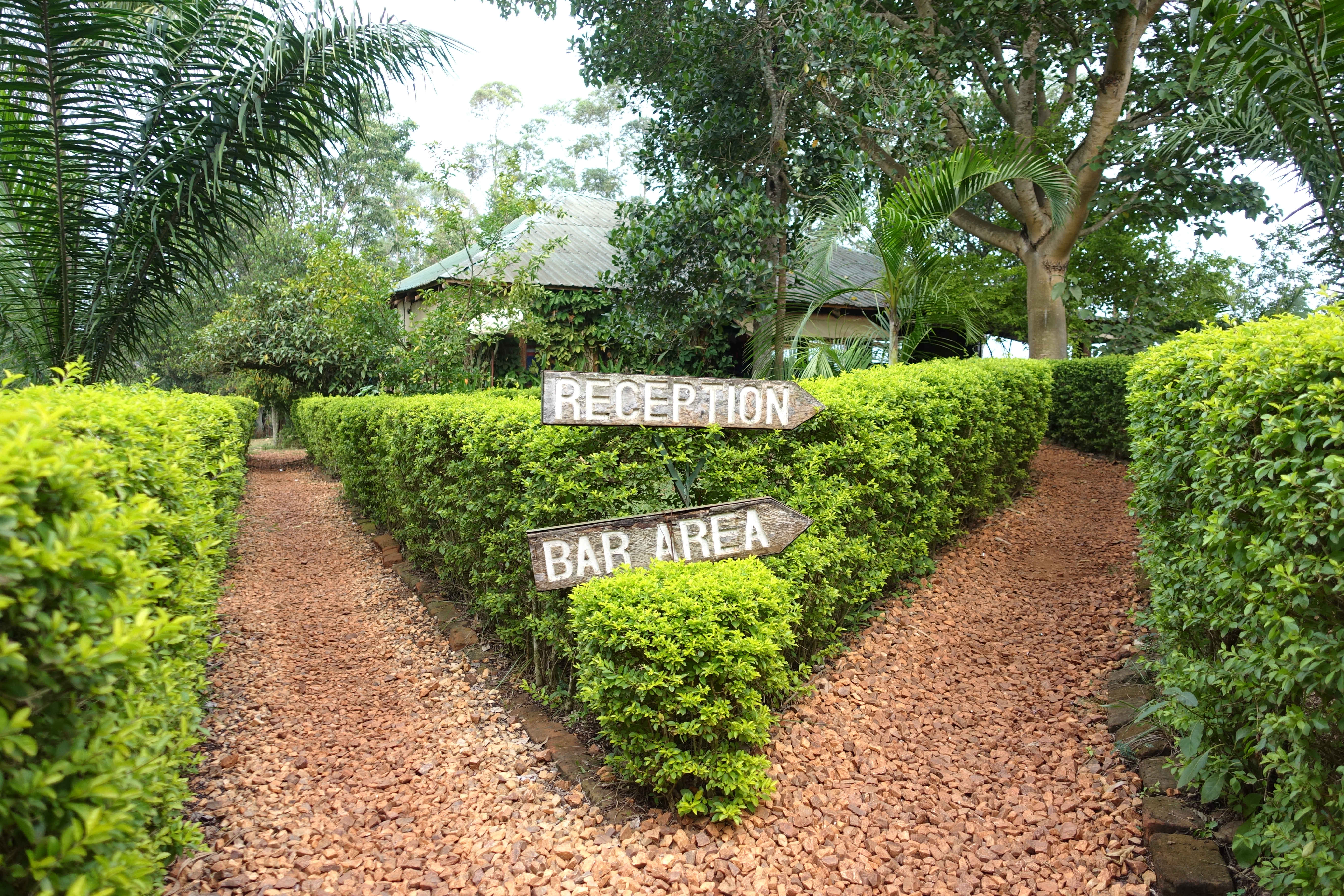 I was traveling with the other two CDO interns and we got some food at the camp upon arrival. Not too long after, another group of three girls arrived and were introduced as being our bunkmates and rafting companions for the following day. They were from South Carolina doing a clinical rotation in Uganda as part of their P.A. certification and on a weekend trip to have some fun. I got to know the girls over shots that kept coming out of nowhere, though presumably courtesy of the South African proprietor.

The next morning I woke up feeling like a million dollars… and excited for the day. I love Uganda because you can wake up at 6am and it’s super dark, sort of cool but not cold, and you can hang out in the peace and let yourself wake up in the same time it takes the sun to rise. Unfortunately, I also woke up to discover that one of my fellow interns had spent the night puking/etc. (I slept through it!) Needless to say, she did not make it on the rafting trip.

What was now a group of five girls joined up with another two girls to ride in the back of a truck to the office of Nalubale Rafting. There we met another five people that we’d spend the day with. We had a traditional mzungu-Ugandan breakfast of rolex and instant coffee, and then took the forty-five minute drive in the truck hauling rafts and kayaks upstream to the edge of Lake Victoria. 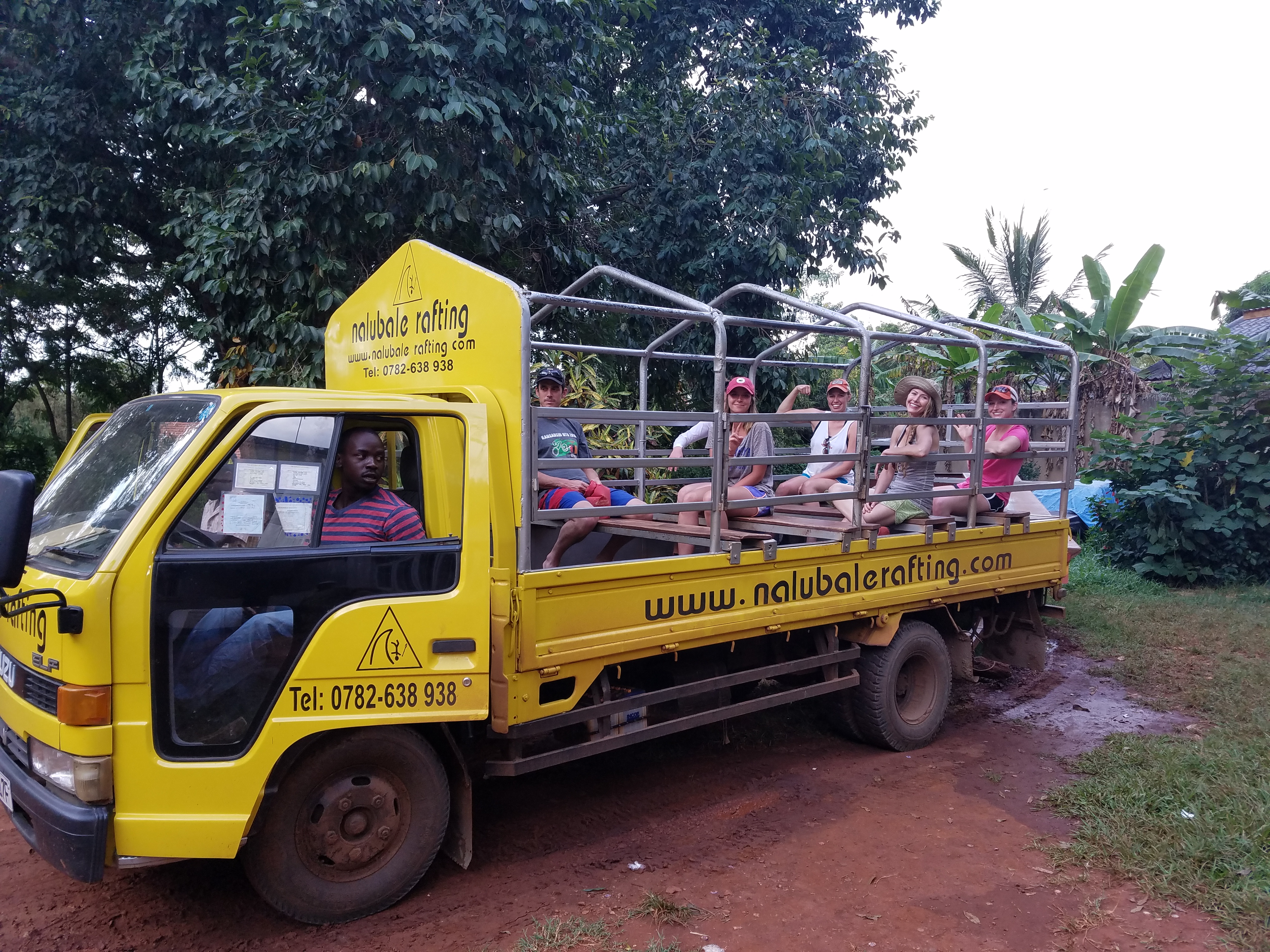 We sat six people to a raft, as well as the guide. My group of five girls was joined by an Asian guy from the U.S. who was sent to Uganda for a week by PWC—gaydar off the charts on this one. He volunteered to sit in the front of the raft to “help steer.” 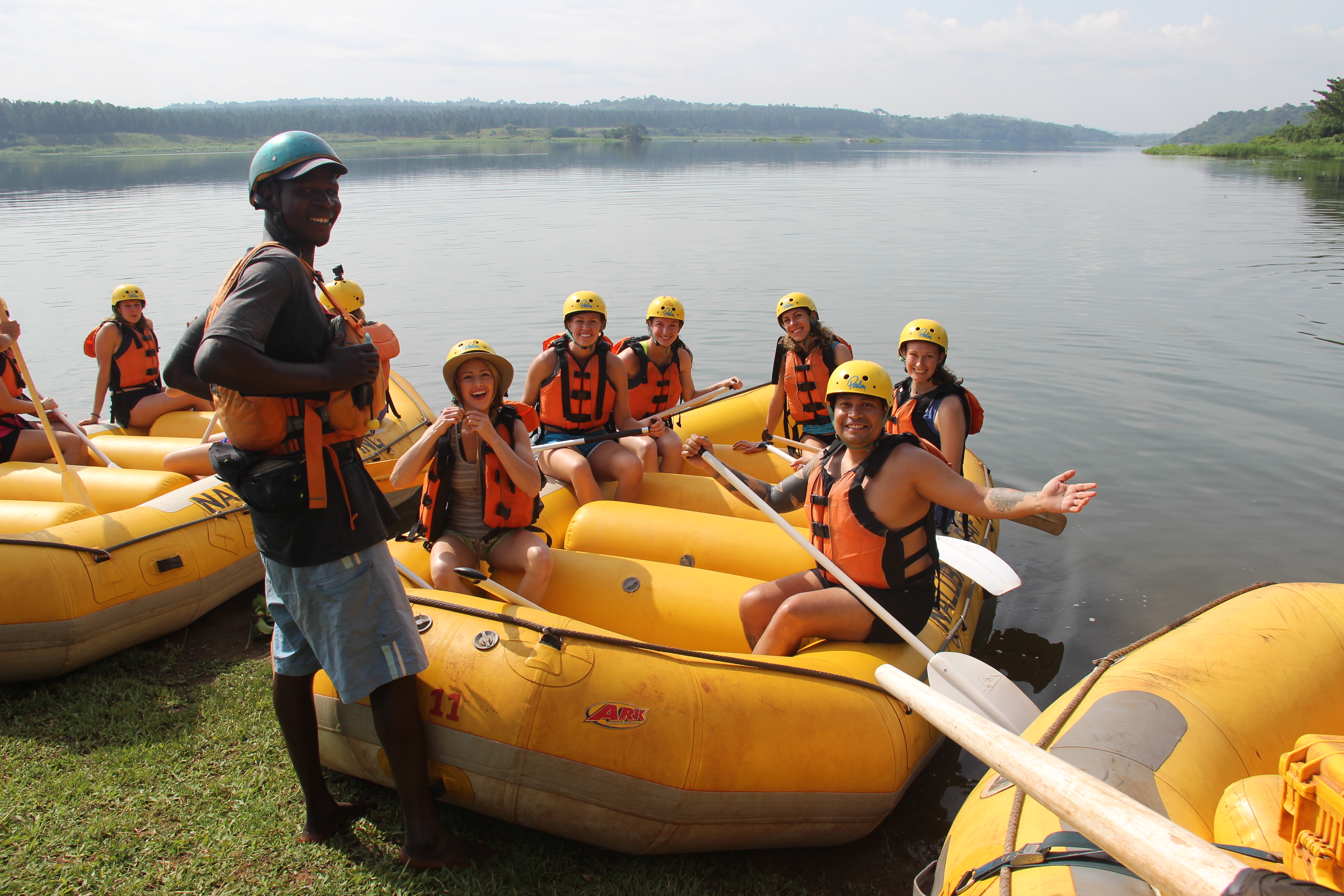 The safety training and support was extensive. And I’m not just saying that to assuage my mom’s concerns. We were given life jackets and helmets, along with a support crew of a safety raft and six kayakers. That made the rafter to staff ratio 12:9. We learned verbal cues like “paddle, paddle, paddle, down, rope, waterfall!” We all looked around at each like “what? seriously?” when the guide told us to jump in the water and practice getting back onto the raft. Then we had to jump back in and learn how to all get on one side of the raft and let it roll vertically over our heads, pushing us under the water, in order to flip it back right-side up in the event it was upside down. This whole time, I was thinking, surely all this training is for the extremely rare circumstance when emergency response is required, right? 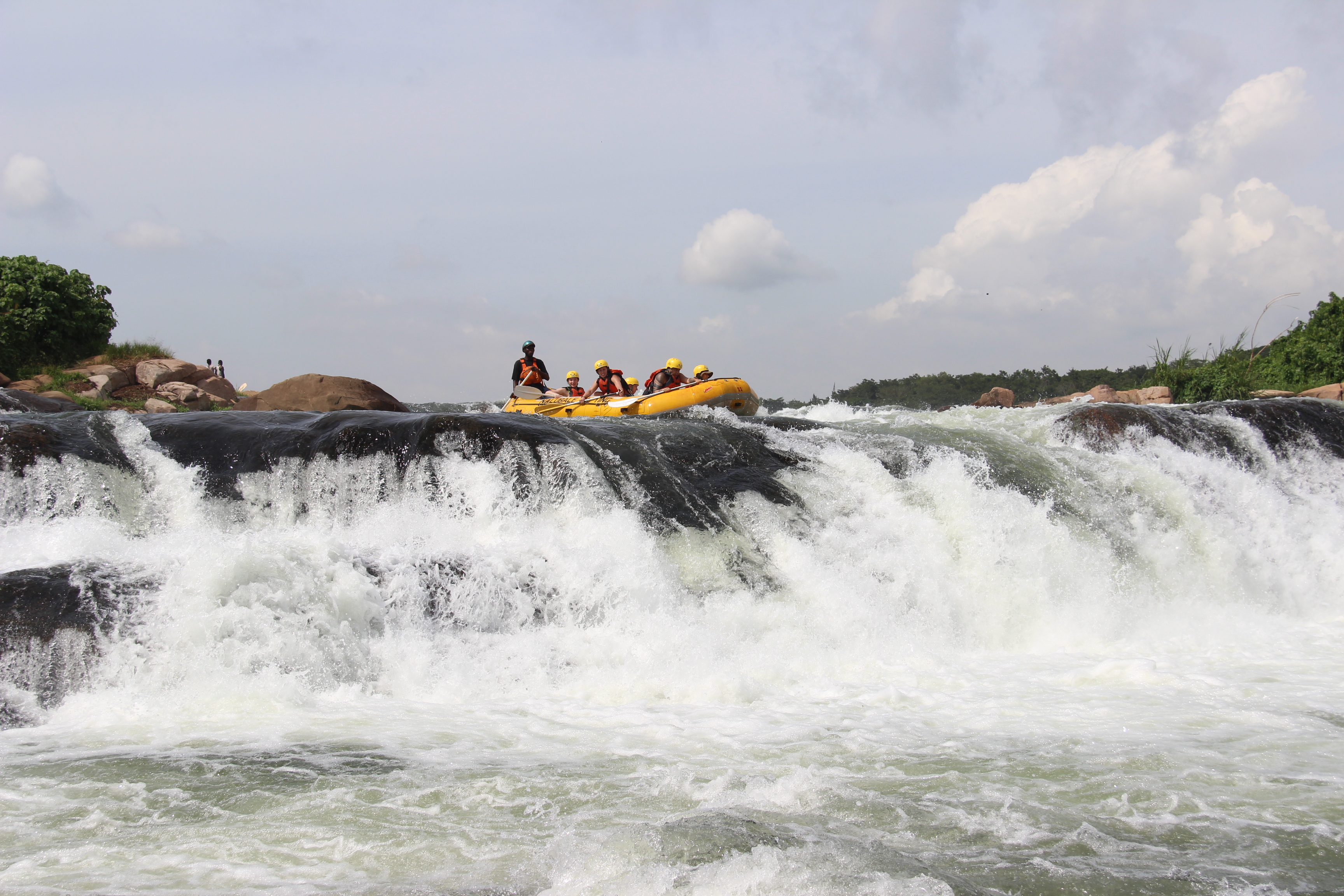 There was a total of eight rapids on our trip. The first was a class V, out of a total possible scale of VI (something I learned on this trip). So it was big. And it was a waterfall. My raft was the first to go of the two in our caravan. We did “paddle, paddle, paddle, down, rope, waterfall!” That meant you sit on the side of the raft and paddle to position it in just the right spot on rapid (spot for safety or adventure, I’m not sure), then get down inside the raft while you got launched into the air, hopefully holding on to the rope. If the raft managed to stay horizontal, then you’d also hopefully drop back into it as it crashed at the base of the waterfall. Then “paddle, paddle, paddle HARDER!” to push the raft in the right direction so as to not get pulled back toward the rocks on the far side of the waterfall and river. Yup, that was one of eight. 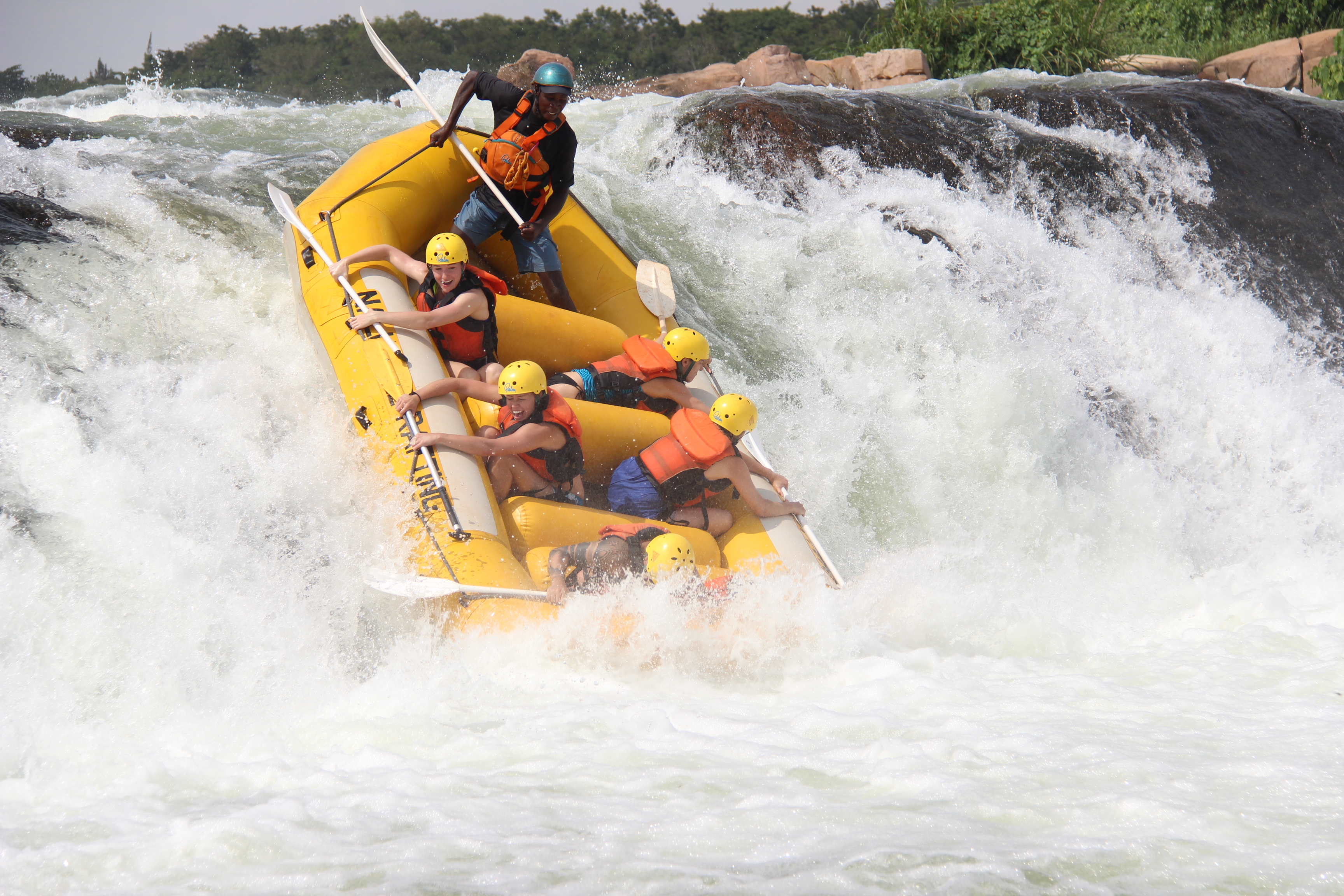 My raftmates and I considered ourselves pretty successful that first rapid. We got plenty wet, but we all stayed in the boat while still getting our adrenaline high. The next rapid was way more fun. “Paddle, paddle, paddle HARDER! DOWN! ROPE! Good-bye! 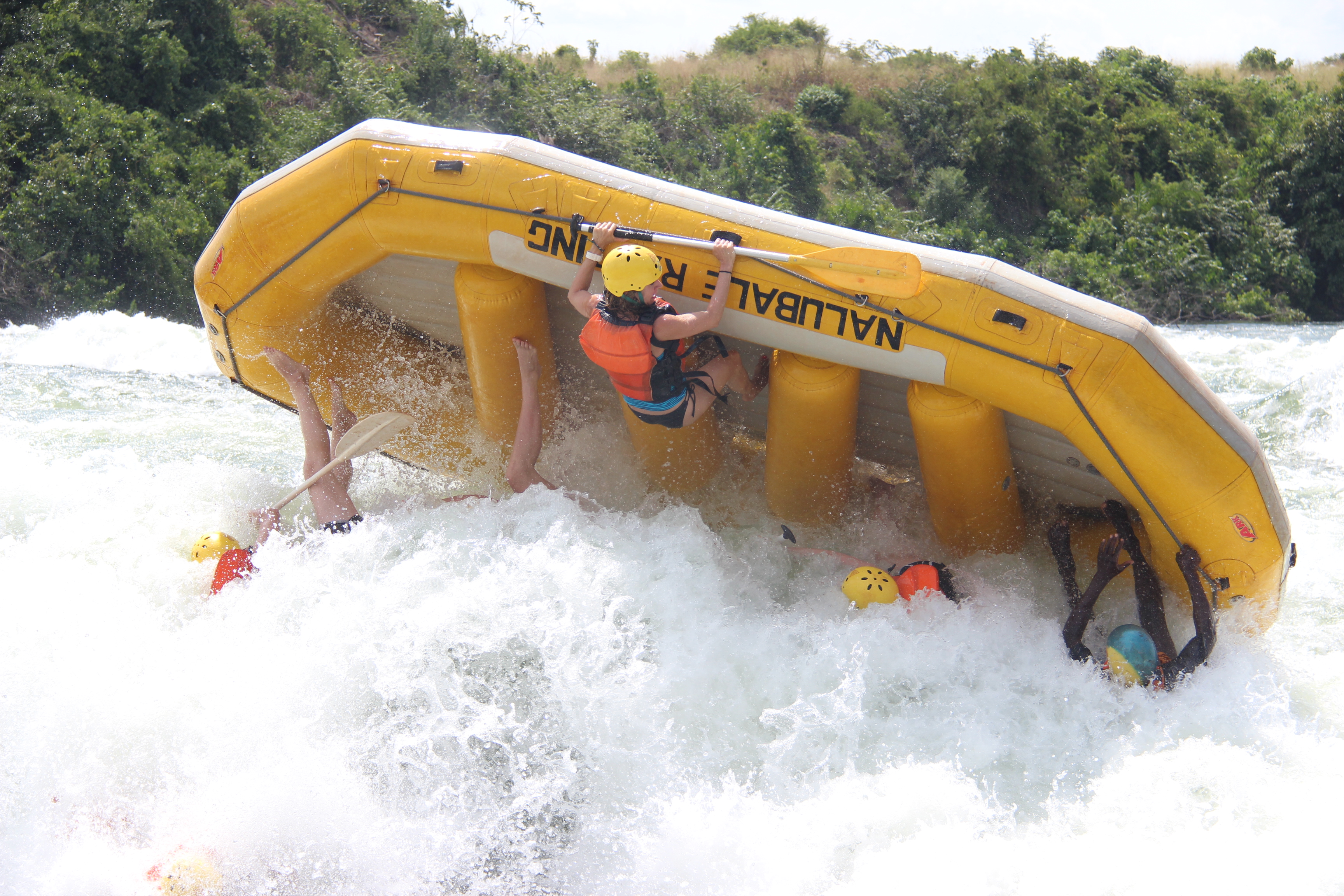 Flipping the raft became a regular occurrence after that. In fact, most of my raftmates requested the most difficult route that ensured 100% certainty of flipping. I was a little less sure of the wisdom of intentionally flipping, but by the last couple rapids it became obvious that real danger was negligible given the life jacket, deep water (not going to crack your bones or get scraped on rocks), and enormous amount of safety crew to fish you out no matter where you ended up. We did skip a part of the river that had what we were told were class VI rapids. We pulled over to the shore and walked a short distance while our guides edged the rafts around a bend to bypass the danger zone. The issue looked, to me, like too many rocks. Smart move.

Between the last couple sets of rapids, our guide said we could go swim. There was a moment of looking around at each other like “what??” and then the people started jumping overboard. The Nile is huge, even at the start of it where we were in Uganda. Swimming is just like being in a vast lake that has a leisurely current to move you along. I sunned myself on the edge of the raft for a few minutes before jumping and doing a flip into the river. 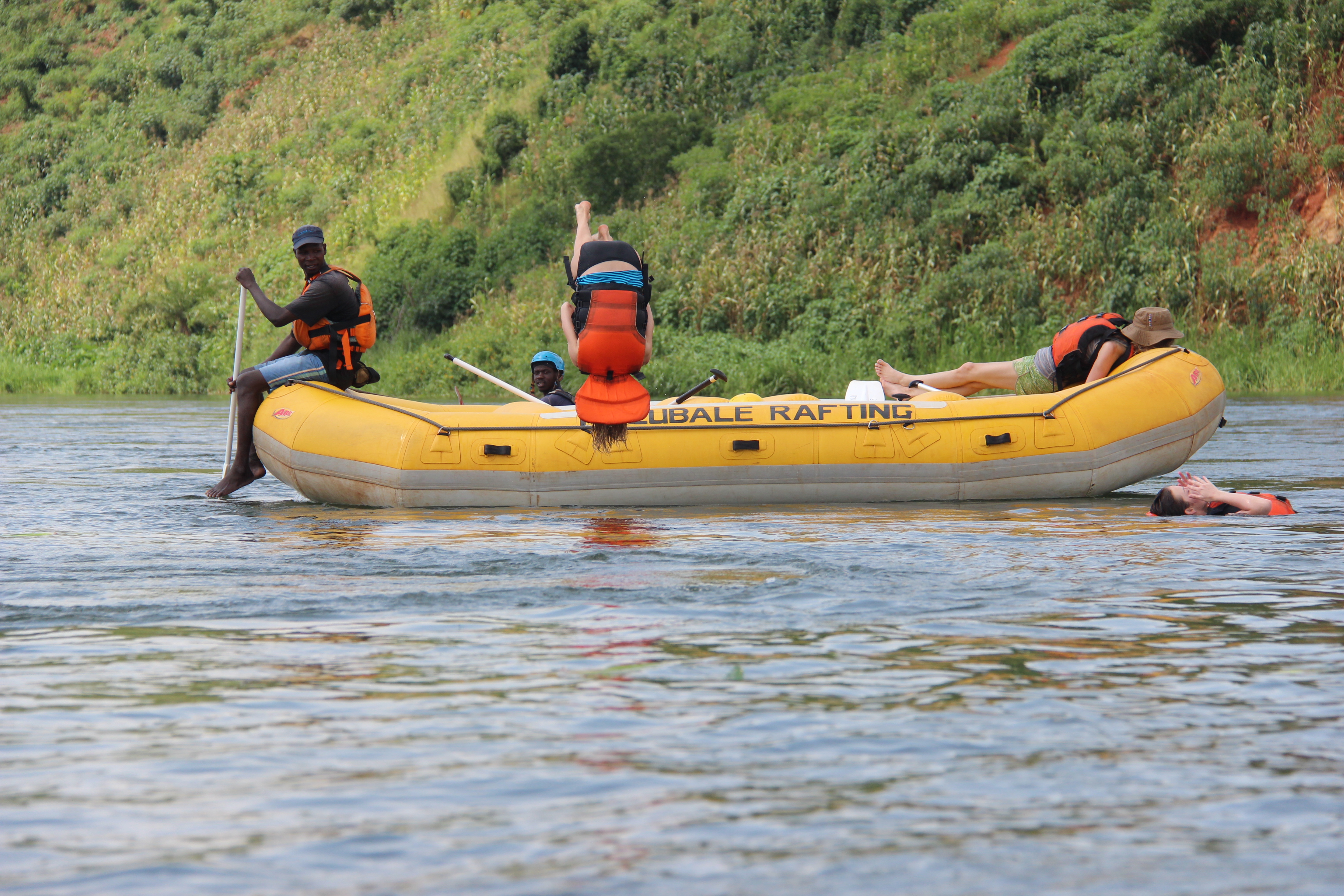 We landed the rafts and worked as a team to carry them uphill to the waiting truck and trailer. The truck turned into a party bus on the way home as beers were passed out and everyone rode standing up, hanging on to the roll bars. By this time we had lost our Gaysian, as well as a man and women who were flight attendants and visiting Uganda for just a couple days. Those two had ridden in the safety boat for half the rafting trip, so it was probably for the best that they didn’t take the party bus home.

We had the option to stay another night in camp and do a big BBQ, which I super wanted to do. But logistics and the sick intern required that we return to Iganga that evening.

It’s unlikely I’ll get sick from being in the Nile. The risk is from ingesting water contaminated with parasitic flatworms, which originate from infected freshwater snails. Parasites thrive in stagnant water rather than the relatively fast moving river. However, I won’t know for sure whether I’ve contracted anything until what Wikipedia says is like four to six weeks from now. Pray for me.

3 thoughts on “THE WHITE NILE”