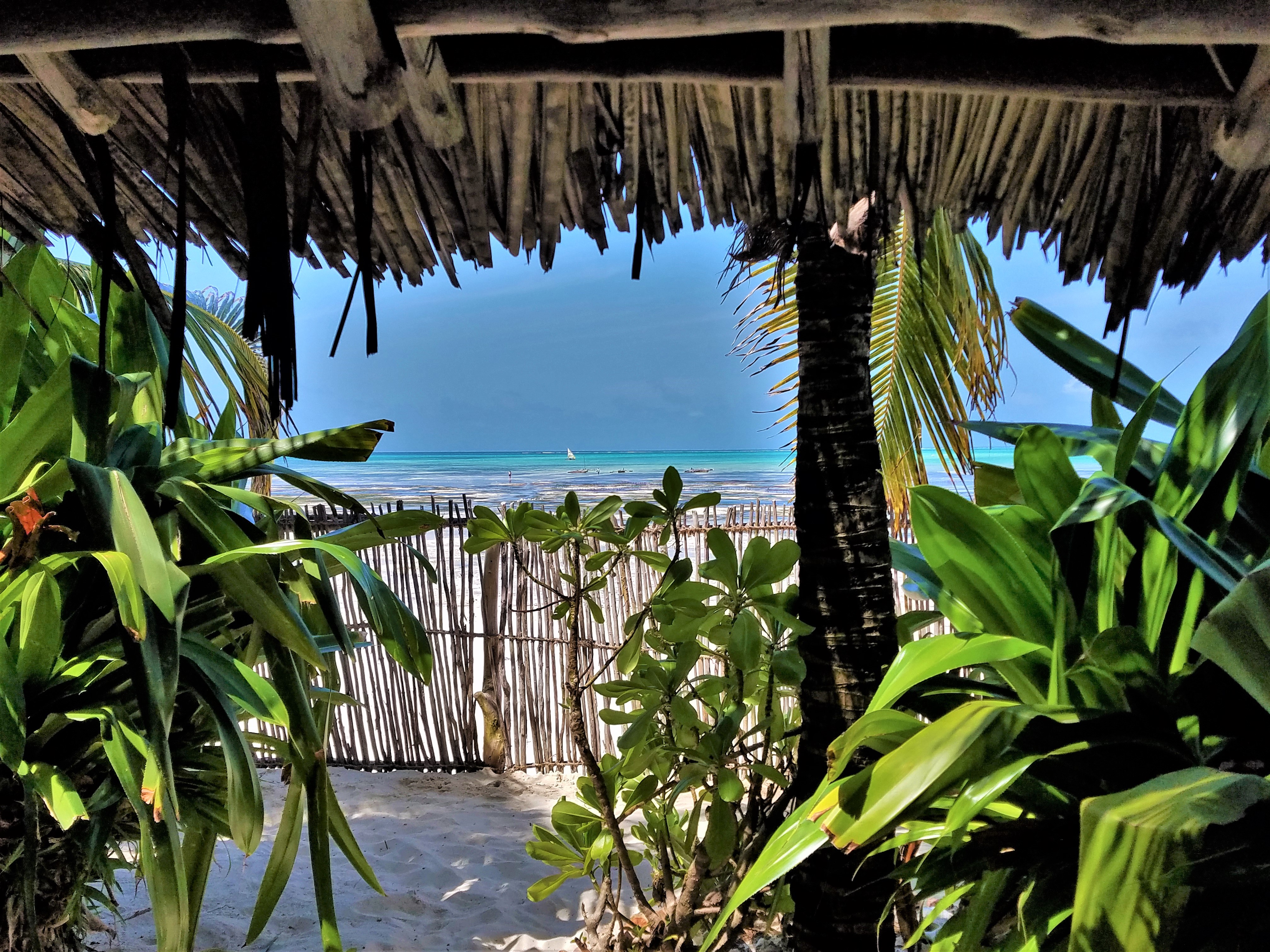 Some people like vacations in the mountains or touring cities. Most people don’t mind cold or even cool weather. I’m not one them. Vacation to me means that I park myself on the beach and bask in the sun, reading, swimming, eating, drinking and sleeping. So after three months of working in Uganda, I traveled to Zanzibar, an island off the coast of Tanzania, to relax, recharge and be alone.

I flew to Zanzibar from Kigali, Rwanda via an overnight flight. Said overnight flight left 30 minutes early from Kigali and subsequently from each of the three East African stops in between. There’s a thing called “African time” here whereby things don’t exactly run on-time, causing meet-ups, parties, and events to start 2+ hours after the stated start time. This apparently doesn’t apply to flights. (I’d also witnessed this a month or so ago when the Texas group from the CDO in Uganda missed their flight back to the U.S. because it left a full two hours early.)

Inter-Africa travel is cheap. My trip from Kigali to Zanzibar, combined with a later flight to Johannesburg, cost less than $300. One checked bag was included in the cost. I used Kenya Airways and despite the poor reviews online, it was an excellent experience: quick, clean, safe, clear communication, and nice planes. Not everything in the U.S. is superior to Africa… most definitely not the air travel.

I had wanted to do more travel in Africa after Uganda and was initially planning on Kenya, but I talked to a number of people in who advised against visiting Kenya in August because of the election season where violence was expected. One German girl, who I had met at Sipi Falls in Uganda, informed me that though she had been working in Kenya for the last 10 months, the German government was pulling all nationals out of Kenya due to the fear of violence during the elections. So, no Kenya.

A friend from Colorado had recommended I check out Zanzibar; really all I had known about it before this was from a song. I arranged to stay at a boutique hotel in a resort town on the beach. I also organized through the hotel to have a driver pick me from the airport. This part is key because without arrangements, you’re left to the haggling, hustling, and potentially danger involved in transportation.

The Zanzibar airport was like a movie-set cliché of an African airport—so small and rugged. However, I think I’m getting desensitized to these things because they seem much less novel than when I first arrived in Africa. I used the two-stall bathroom at the airport and had to leave the door open because my luggage wouldn’t fit inside. It’s going to be weird to go home and have people be all private about going to the bathroom.

I made friends with my driver, Sully, on our one-hour trip across the island and through villages to the hotel. The very best thing you can do with people here is ask about their lives and their language. You become less of a foreigner and more of someone who cares. Sully was very pleased to teach me several Swahili words and phrases: “Mambo” means hello. “Asante” means thank you. And “Hakuna matata” is a real phrase and does, in fact, mean no worries, and is commonly used to express that all is good.

The villages in Zanzibar looked a lot like the villages in Uganda, though set in a more tropical environment and with marginally more sophisticated structures. I was a little worried when we turned off the main road to take the final approach to the hotel and saw familiar piles of litter and the same basic, tiny homes that are common to East Africa. Sully parked the van at the unimpressive (and official) back entrance of the hotel that amounted to loose, wooden fencing. But, oh, behind a little wooden door was paradise!

I spent the first day at the Mamamapambo Boutique Hotel debating if it was really that good or if I was just experiencing culture shock after being in Uganda for three months. The hotel was a cute and gorgeous beach bungalow that had just six guest rooms with a central, open-air dining area. I somehow managed to get one of two ground-floor rooms that faced the ocean and came with hammock-bed swings tethered on the covered, wooden porch. My room was a slice of heaven with a pretty, blue walls and ceiling, a large bed, beautiful art and lights, all tied together with a dark woods, bright colors, and intricate Arabic/Indian designs that are native to Zanzibar. There was a large en-suite bathroom with a cool stone shower, dual sinks, and the biggest mirror I’d seen in Africa.

The guest house I’d lived at in Uganda was very nice. For Uganda. I’d lived better than 99.999% of the people there. When traveling around Uganda, I’d stayed mostly at hostels, which were also fine. As long as a place has a decent bed with clean sheets and some level of security, it’s hard to complain. The bathroom and shower situation at the hostels varied, ranging from smelly latrines and cold showers to private toilets and sometimes-hot showers. Even in Rwanda, where there were nicer hotel options available, I’d stayed at a hostel, which was also just fine. While at the hostels, I’d always ended up bunking with others—male and female—and that was OK, because that’s part of the adventure and how you get to meet people from all over the world. In retrospect (post-Zanzibar), the jump from staying at very basic but totally livable hostels to staying in a hotel with privacy, beauty, and a beach was definitely a culture shock. 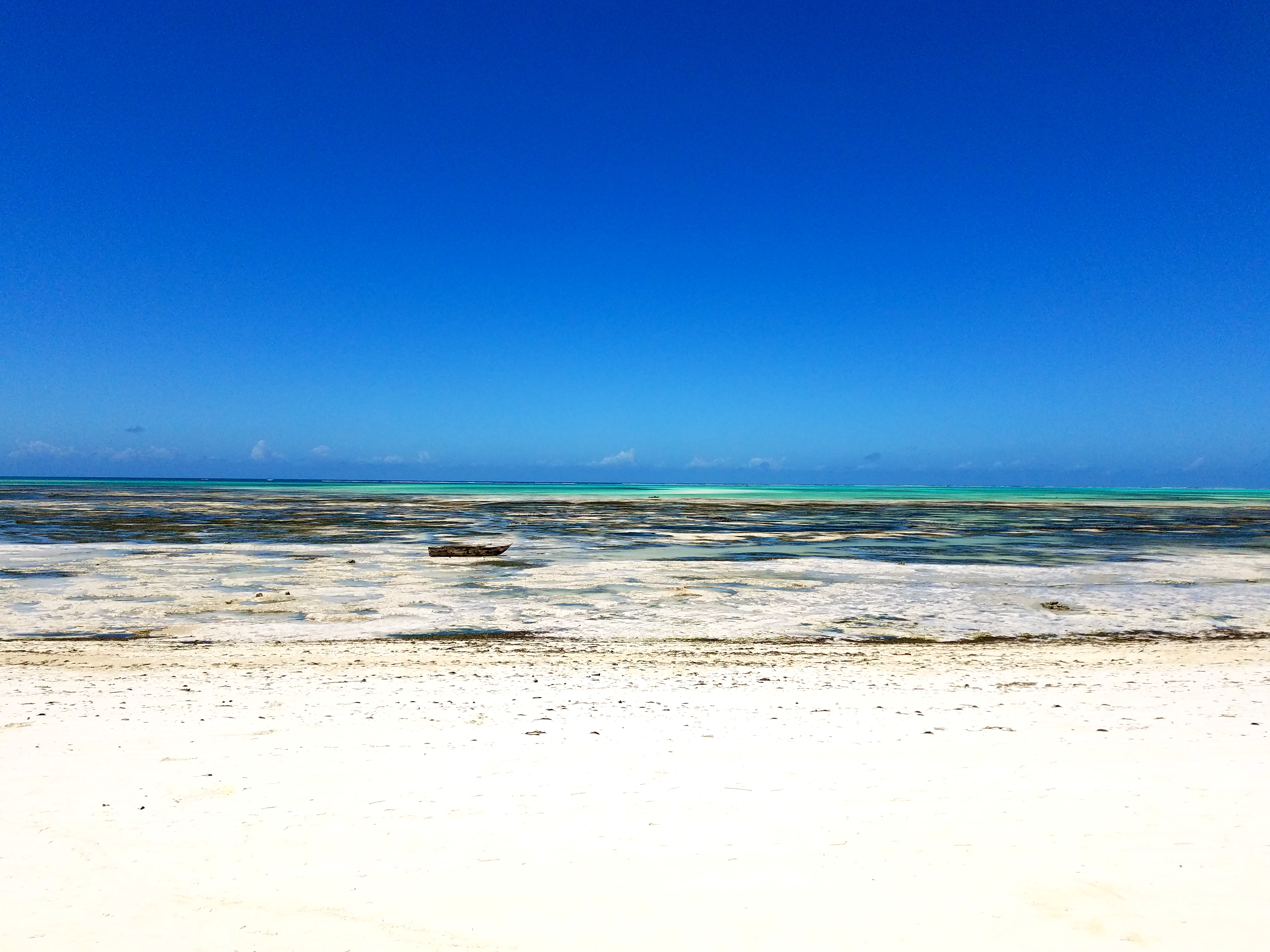 My first afternoon at the hotel, I took a four-hour nap on my hammock-bed in front of my room. When I’d fallen asleep, the tide was way, waaaay out. I’d seen people walking easily a quarter mile out, and fishing boats were banked on sand 50 yards from the hotel. When I woke up at 6pm, the ocean was roaring and was quite literally at my doorstep. Sigh… I love the beach… 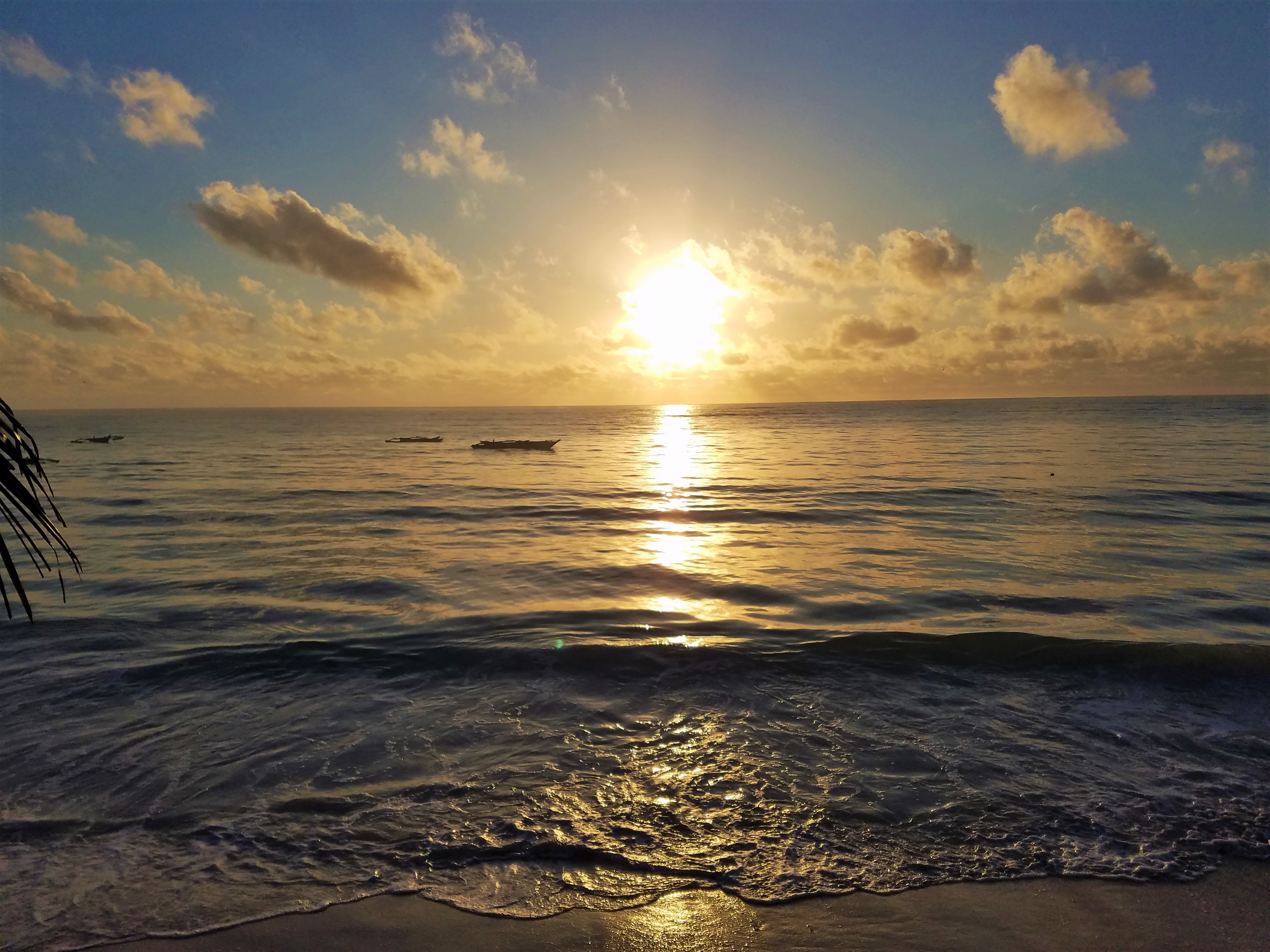 One of the very best parts of my entire African experience has been meeting people, ranging from the huge numbers of European backpackers and tourists to the African people. At Mamamapambo, a young man named Martin introduced himself to me in while he was sweeping the sand off my porch on my first afternoon. Every time he came around after that to serve me lunch, drinks, or inquire about my welfare he would also ask me questions such as, “Do you know George Bush?” (I told him I did know George Bush.) And: “Who was the first president of America?” and “What is the temperature in America?” and “What is the international language in America? (Martin was surprised to learn it was English… hmm…). And, when he saw me working on my laptop, “Did you get a computer certificate?” This, of course, was all in very broken English. I finally figured out that what Martin meant by “computer certificate” was that he thought I had special computer training because I was simply using a computer. I told him that no, I did not have a computer certificate and that I used a computer in my job. Later Martin asked me how much my Bluetooth speaker cost; when I told him around a hundred dollars, his eyes quite literally widened.

I spent most of my Zanzibar vacation voluntarily captive at the hotel. I sat on my porch or in the beach lounge chairs that were located safely behind the wooden fence set atop the concrete sea-wall. I watched the deep, dark blue roaring water in the morning gradually recede to sand, seaweed farms, and aqua-marine shallows in the early afternoon, then fill back up with dark, warmer water in the afternoon. I ventured out to swim only when I saw other people safely doing so and was shocked, SHOCKED!, at how warm the water was, especially near my feet. I figured out, after also swimming the next morning, that the water is much warmer in the afternoon, due to the warming of the shallow water during the day. These are things not known by someone from Colorado.

I ended up staying at the hotel the whole time for other, practical reasons. For one, I didn’t have any Tanzanian shillings to spend at local cafes or on touristy things. I’d tried to exchange my Rwandan Francs at every one of the five hole-in-the-wall forex offices at the airport and nobody would buy them. Fortunately, everything I spent at the hotel could be put on my Visa debit card, for the typical additional surcharge of 5%.

The other real reason I stayed at the hotel was due to safety. Traveling in the company of females or even alone is one thing in rural Uganda and Rwanda, it’s another in Zanzibar. Tourists are regularly targeted for pick-pocketing, and if you carry electronics on you, muggings. Some violence is reported to have occurred against outsiders and police protection is a joke; local justice is done by vigilante mobs and, from what I’ve read, often results in a death sentence. Could I have walked down the beach in the middle of the day and been perfectly safe? Maybe, but maybe not. My personal cost-benefit analysis led me to decide that as I was perfectly happy reading, dozing, eating and drinking at my hotel, then I might as well just stay there. Maybe someday I can go back with friends to kite surf, snorkel, and do jungle tours. 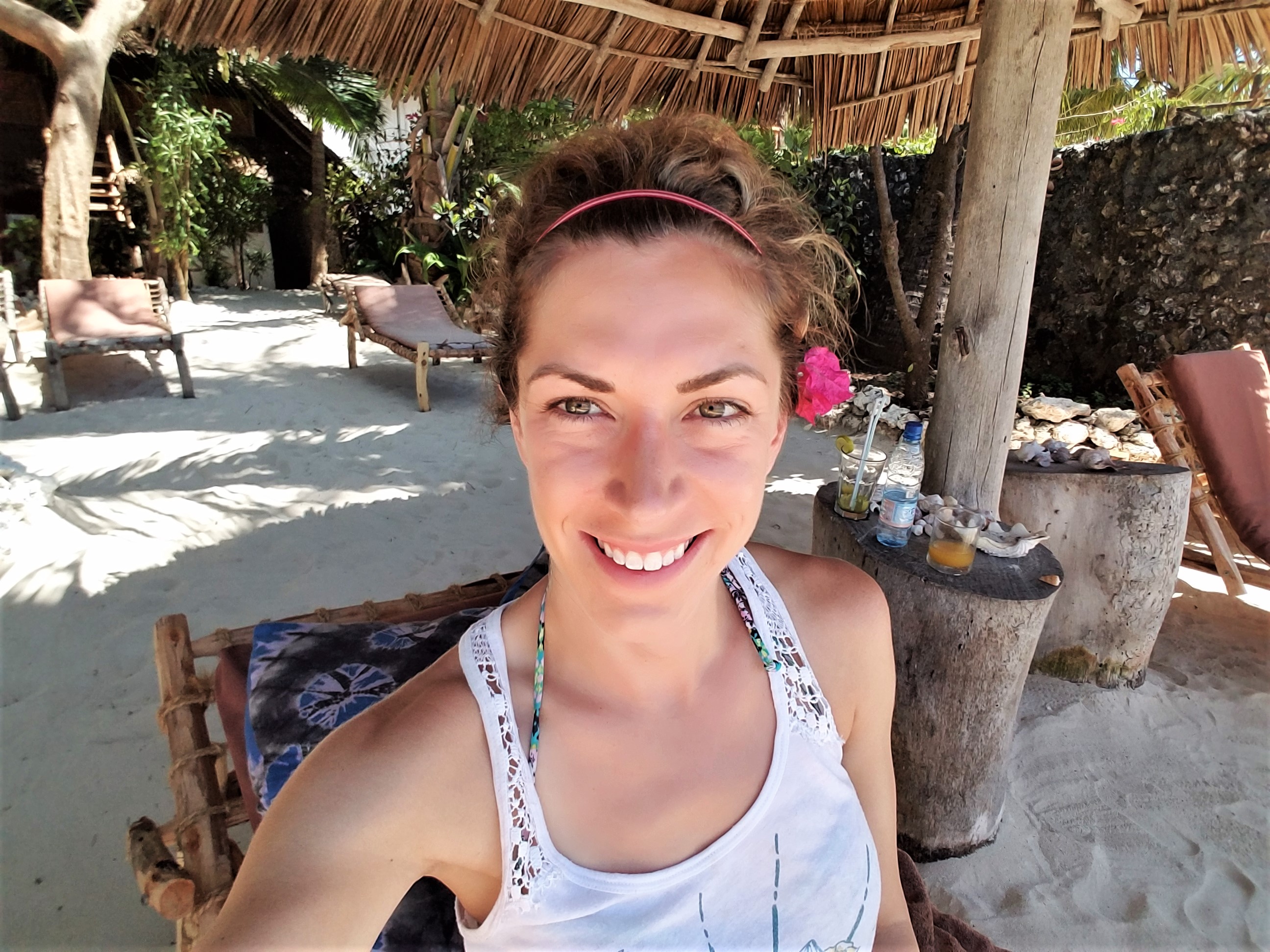 I spent my last night in Zanzibar at hybrid hotel/hostel in Stone Town, an uber-touristy area that has a mixed cultural history marked by architecture build from coral—and is now crumbling. The city felt dilapidated and crowded, yet had the expectation of tourists spending a lot of time and money there. After all the other places I’d visited and seen in Africa, Stone Town didn’t appeal to me. I remember years ago after I got back from the Greek islands saying that I could’ve had virtually the same experience in Mexico for a third of the cost. That’s kind of how I felt about Zanzibar, and definitely Stone Town; the culture you experience in those kind of places is historically recreated and fabricated for tourists. I was glad to have gone since I was a hop, skip, and jump away and it remained relatively cheap given the circumstances, but I wouldn’t make a special point for it as a destination. 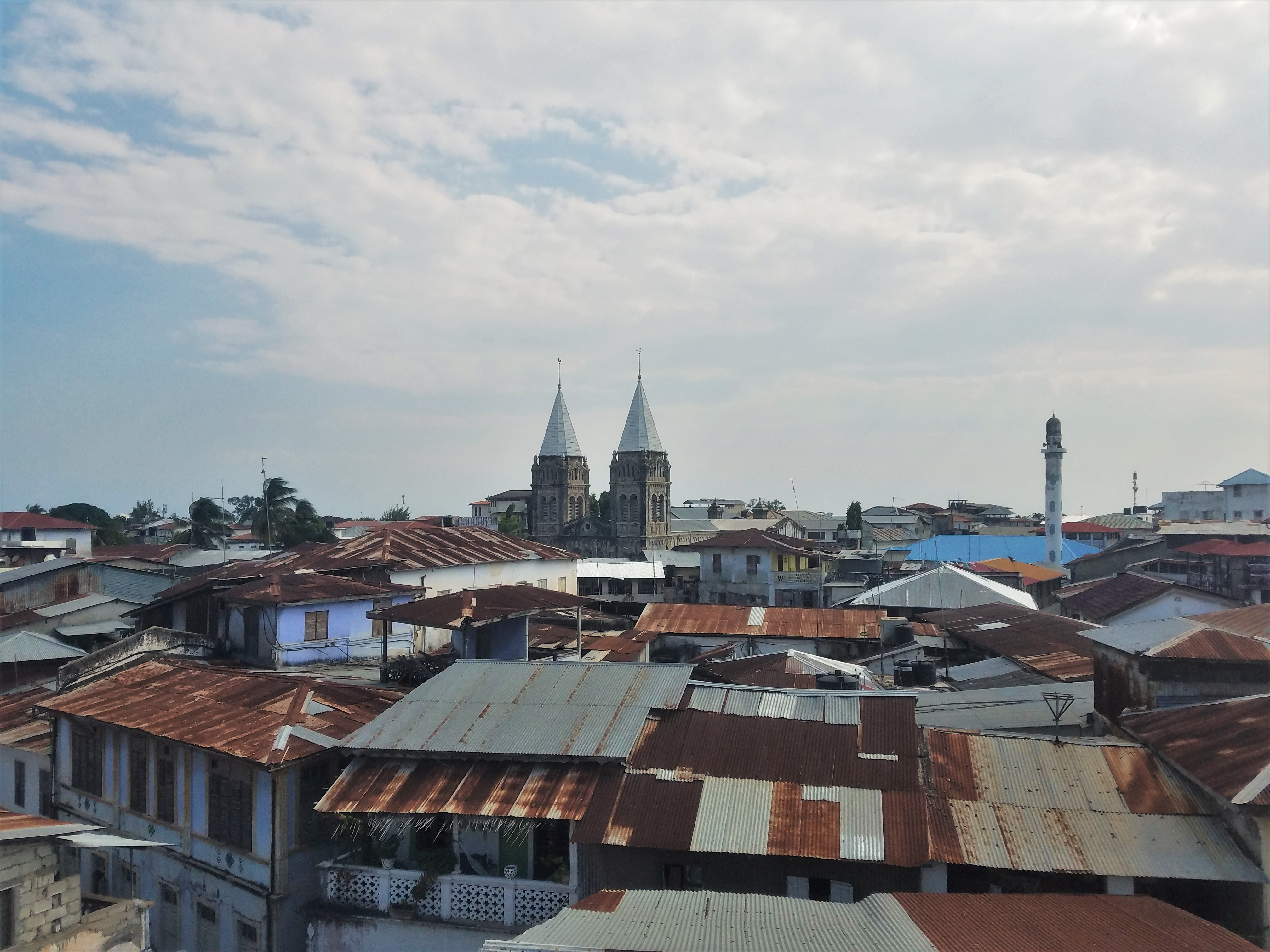 The next leg of my trip included a layover in Nairobi before departing to Johannesburg. Flying south out of Nairobi, on the Kenya-Tanzania border, was Mount Kilimanjaro looming tall, it’s flat top and ice blemishes pushing above the clouds. Even being from Colorado, this 19,000 foot volcanic mountain rising out of seemingly flat Earth was impressive. Now that is a destination I’d make a point to visit.

2 thoughts on “THE DECOMPRESSION”