Not to brag or anything, but I’ve only had one cavity my entire life. And it was in a baby tooth, so it fell out. I did get a filling last year because of a chipped tooth that had potential for a cavity, but that was preventive.

Despite now living in Westminster, I still go to the dentist in downtown Denver for my cleanings every six months. The full service dental office is quick, clean, has the latest dental technology, and is staffed by friendly, professional people. And up until my trip to Uganda, that was the extent of my experience with the world of dental.

On Wednesdays, I’m assigned to go to the CDO’s health center to help out wherever I’m needed. It’s an outpatient facility that tests for and treats common diseases, delivers babies, aids minor and major trauma, and provides dental care. Today I was going to the dentists’ office to see if I could help my new friends, Lilly and Peter. They are a retired couple that had come from the Denver area to volunteer their professional dental services to students and employees of the CDO, as well as to the patients at the health center and to local outreach.

I walked into the one-room dentists’ office and surveyed the chaos. In the chair closest to the door, a child was wailing at the top of his lungs. Lilly held a syringe full of lidocaine inside his mouth, administering it slowly in preparation for a tooth extraction. After she pulled the needle out, the five-year-old kid wouldn’t open his mouth back up for her to look around. He’d turn his head and cover his face while he screamed and screamed. He kept screaming while we waited for the lidocaine to take effect. The mother was asked into the room to help. She and a Ugandan doctor held the boy down while Lilly forced his mouth open, inserted her tools, and popped out a decayed baby tooth. The kid kept screaming as the mother carried him out of the room.

The chair on the other side of the dentists’ office was occupied by a man who sat unmoving and silent. Peter worked in his mouth while an American volunteer in her 20s shined a pocket flashlight into it. While I was occupied with the aftermath of the screaming boy, the girl left her assistant’s post, wandered into the supply closet at the far side of the room and barfed up her breakfast all over the place. 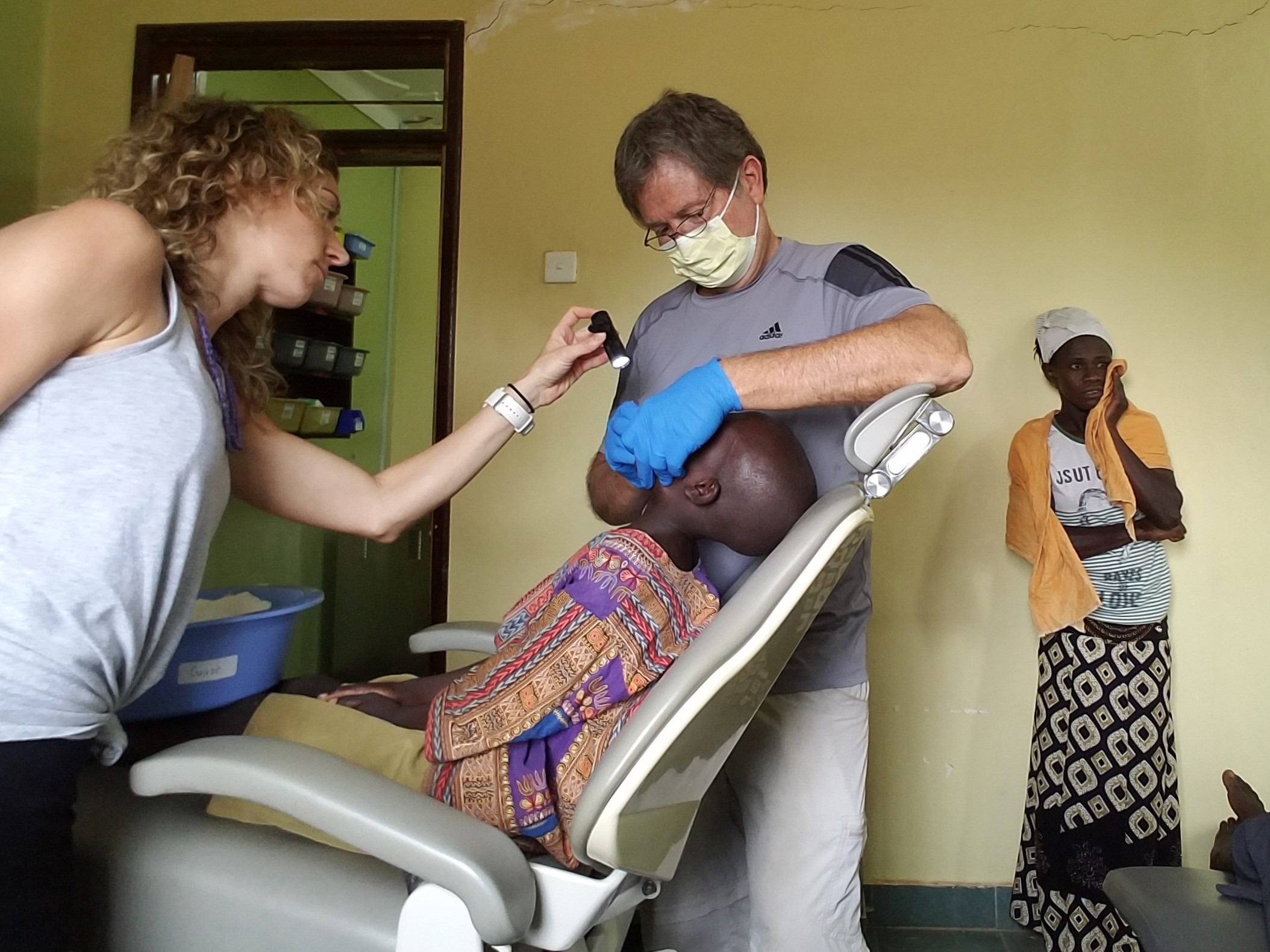 I assisted Peter because he used a chair that didn’t have a working light. At first, I kept my distance from peering directly into peoples’ mouths since I didn’t want the same fate as the girl. But my stomach seemed to do just fine, so I inched closer, encouraged by Peter’s narration of everything he was doing. It was fascinating.

This dental clinic is open to the public free-of-charge every Wednesday to perform pain relief services, which means extractions. In the Third World, dental outreach equates to pain relief. Not cleanings, not prevention, not mitigation. Peter and Lilly were here for two weeks and would spend almost 100% of their time doing extractions, alongside the Ugandan dentist employed by the health center.

We saw patients young and old, most with teeth decayed from a total lack of oral hygiene. Many also had visible physical ailments. One lady crawled in on her hands, dragging her useless legs, bent at the knees, behind her. She pulled herself right up onto Lilly’s chair. More than a few children had distended bellies, either from malnutrition or worms or both. One boy came in with a mouth that was so diseased that the dentists suspected there was an underlying systemic condition causing it. He was given an H.I.V. test, which was negative. 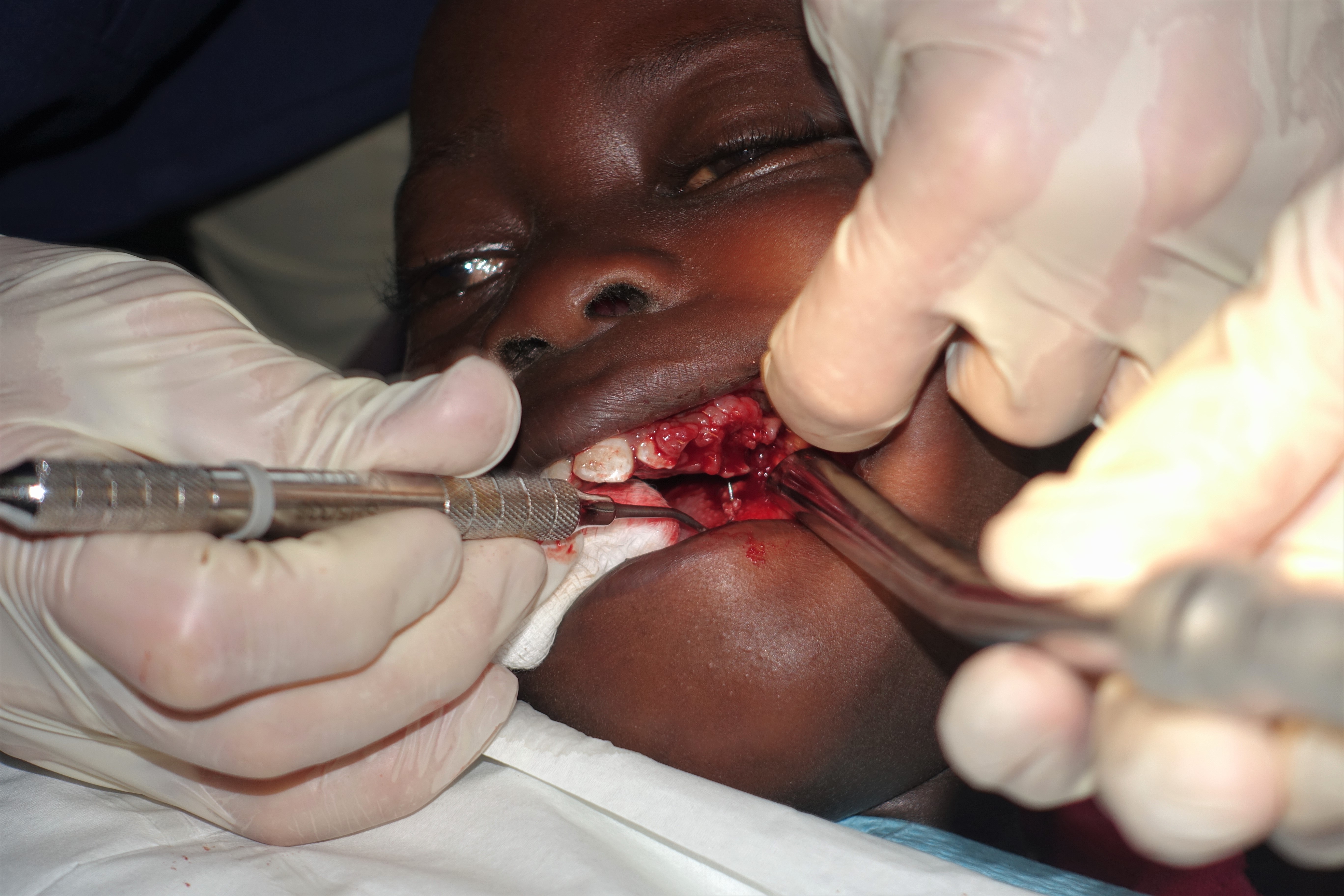 After working all morning, our next patient was a woman who complained of pain in the top, very back, right side of her mouth. She was the first person we’d seen who understood and spoke some English. Peter checked her tooth and told her it was decayed and infected and that he recommended an extraction. It was clearly news the woman didn’t want to hear, but Peter warned her of the continued pain and seriousness of infection. He added that “it wasn’t a very important tooth.” I ran my tongue over my top, back molar and wondered if not having it would bother me. The woman opted to have the extraction. Later I found out that the tooth this woman had removed, the “third molar,” was what we call our wisdom teeth. It hadn’t before then occurred to me that these people were all walking around with full sets of wisdom teeth due to lack of oral surgery available to them in their teen years.

Peter anaesthetized the English-speaking woman but got called to assist a particularly tough case over at Lilly’s chair. A while later, he was back and started in with his tools. The woman winced and said, “I feel pain!” Peter shot her up with more lidocaine before proceeding. I wondered about all the other patients who had come through our chairs and couldn’t speak English to tell us about their pain.

Most patients endured the needles and extractions with little reaction. They typically stared straight ahead, mouths open, without any visible tensing in their hands, bare feet, or bodies. Sometimes we could tell by a quick jump or fluttering eyes that the patient was feeling something, in which case they got more of the lidocaine/epinephrine cocktail shot into their gums and jawbone. One young guy got nicknamed “the hand-grabber” because despite getting much more anesthetic than anyone else, kept grabbing at the wrists of the person trying to work inside his mouth. He eventually got a stern talking to by the Ugandan dentist and on about his third rotation through the dental chairs, finally got his tooth removed. The only case I saw that required sedation was a young boy who had many extractions as well as tissue removed; he got ketamine. A lot of it. 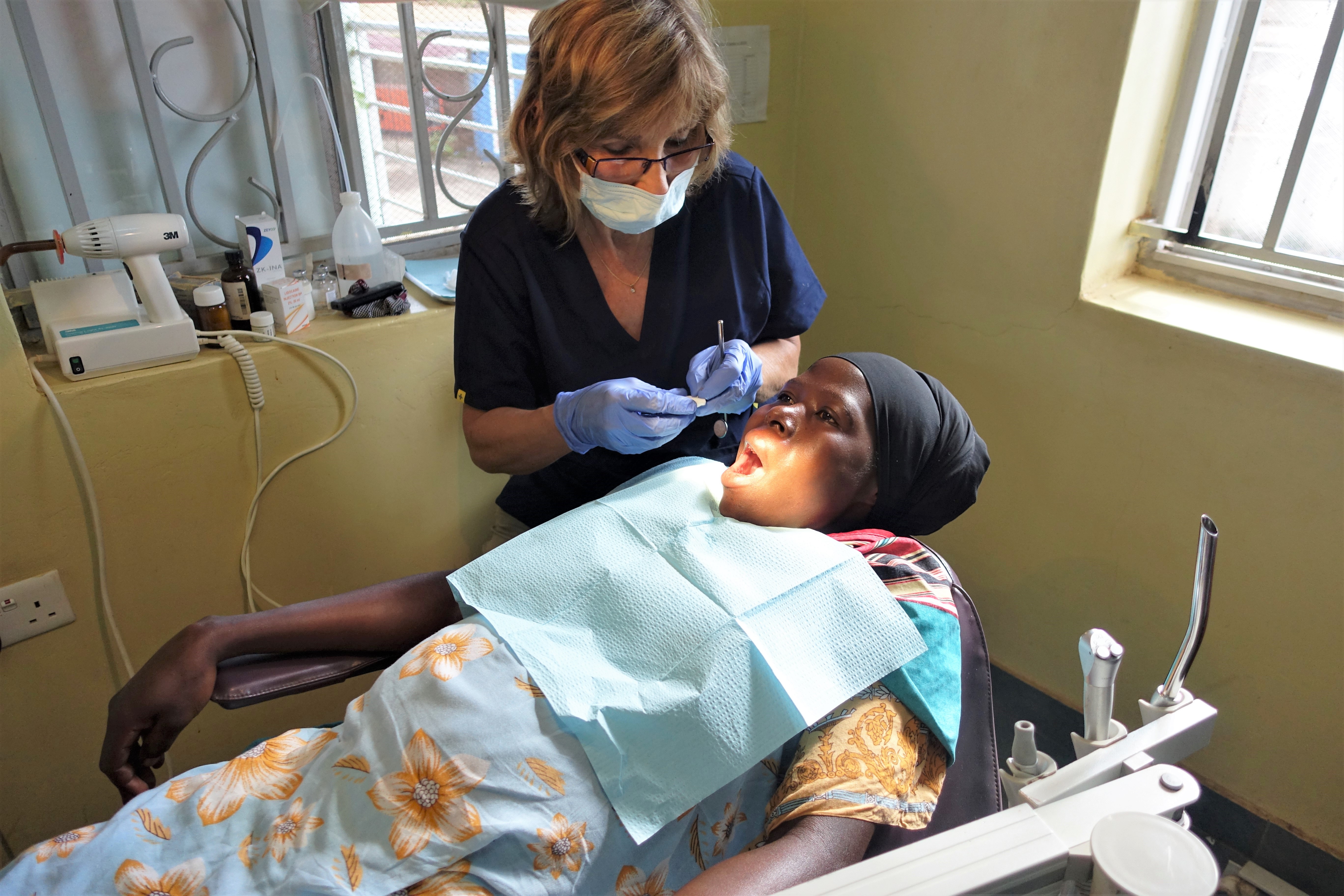 The dentists’ office was located on the corner of the second floor of the health center where it caught a breeze through its open windows. However, the office, which was really a small room, was far from ideal. The floor plan was narrow, barely fitting a dental chair at each end and a desk in the middle. It was loud because of the suction machine that was housed in a cabinet along the side of the room. Only one of the fully-outfitted, but older, dental chairs was working. The other had been fried upon its original arrival at the health center when it got plugged directly in the power outlet rather than the voltage transformer. Now the thing amounted to an unmovable, un-reclining chair with all its arms and assembly taking up space. Neither that chair nor the semi-functional one across the room had access to a table for a tray and tools.

Despite all this, Lilly and Peter attended to patients quickly, kindly, and professionally. They used the help of the 26-year-old Ugandan dentist to translate and diagnose patients. The problem with diagnoses in this environment was that when patients opened their mouths, there were so many visible problems that it was impossible to know which was causing the greatest problem and in need of extraction.

I learned that the process of extraction in the field, meaning here in Uganda, is essentially the same as the process in the U.S. An anesthetic is given, the gum is pushed away from the tooth using a sharp, fine instrument, then more forcefully by a larger, blunt one. The tool’s hooked, flat head is then used to lever down from the outside of the tooth. Sometimes this is enough to pull the tooth all the way out, but often forceps need to be used to grab both sides. There is no stitching up unless multiple teeth in the same area are removed.

The primary differences in the Ugandan vs. U.S. extraction process were based on tool availability. For one thing, the dentists had to be more frugal with instruments due to the limited ability to sanitize. We used an ultrasonic cleaner followed by an autoclave, but it wasn’t an efficient process for a variety of reasons. The other tool we lacked was suction. Only the one working chair had it available, and the suction machine was so loud that we literally couldn’t hear each other speak when it was on. So we left it off except for use during special procedures.

A source of frustration throughout the day was the useless state of much of the donated equipment in the dental office. When a dental chair shipped from the U.S. breaks, there’s no one with the skills to fix it and there’s nowhere to get the parts. To make things worse, there’s nowhere to dispose of it. Among the other unused equipment in the office was an x-ray machine, which took up valuable real estate on the small storage unit next to the desk. It had never been used because no one knew how. Organizations and individuals donate old and used equipment with the best of intentions, but the reality of the situation is that we’d have been better off with simple tools that were locally sourced. 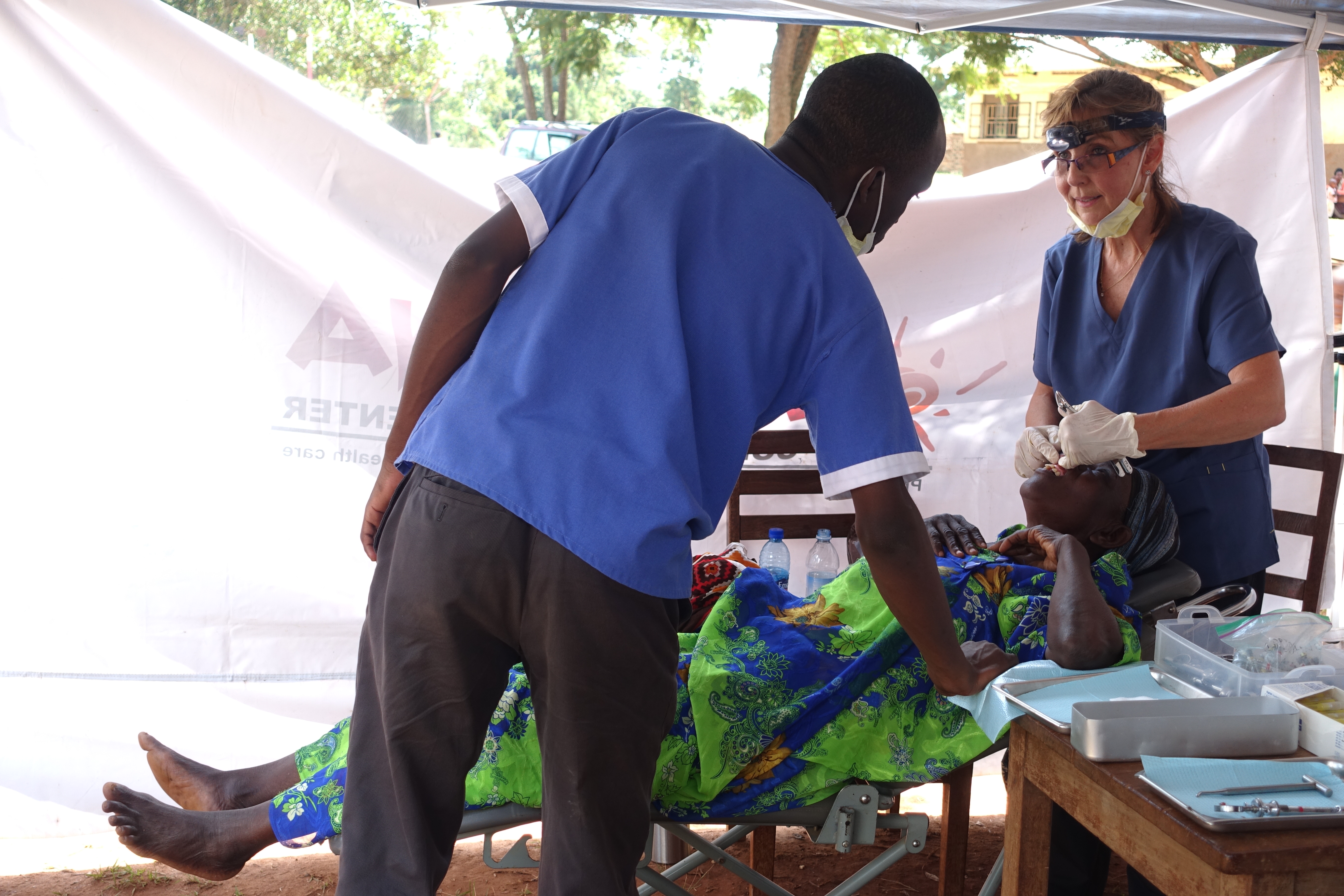 I spent more time with Lilly and Peter at local outreaches, watching them perform the same procedures again and again. The focus was always on pain relief. I’ve always thought it would really suck to live in the Old West where there was no dental or eye care. Now I know it really sucks to live in Uganda.

8 thoughts on “THE DENTISTS’ OFFICE”