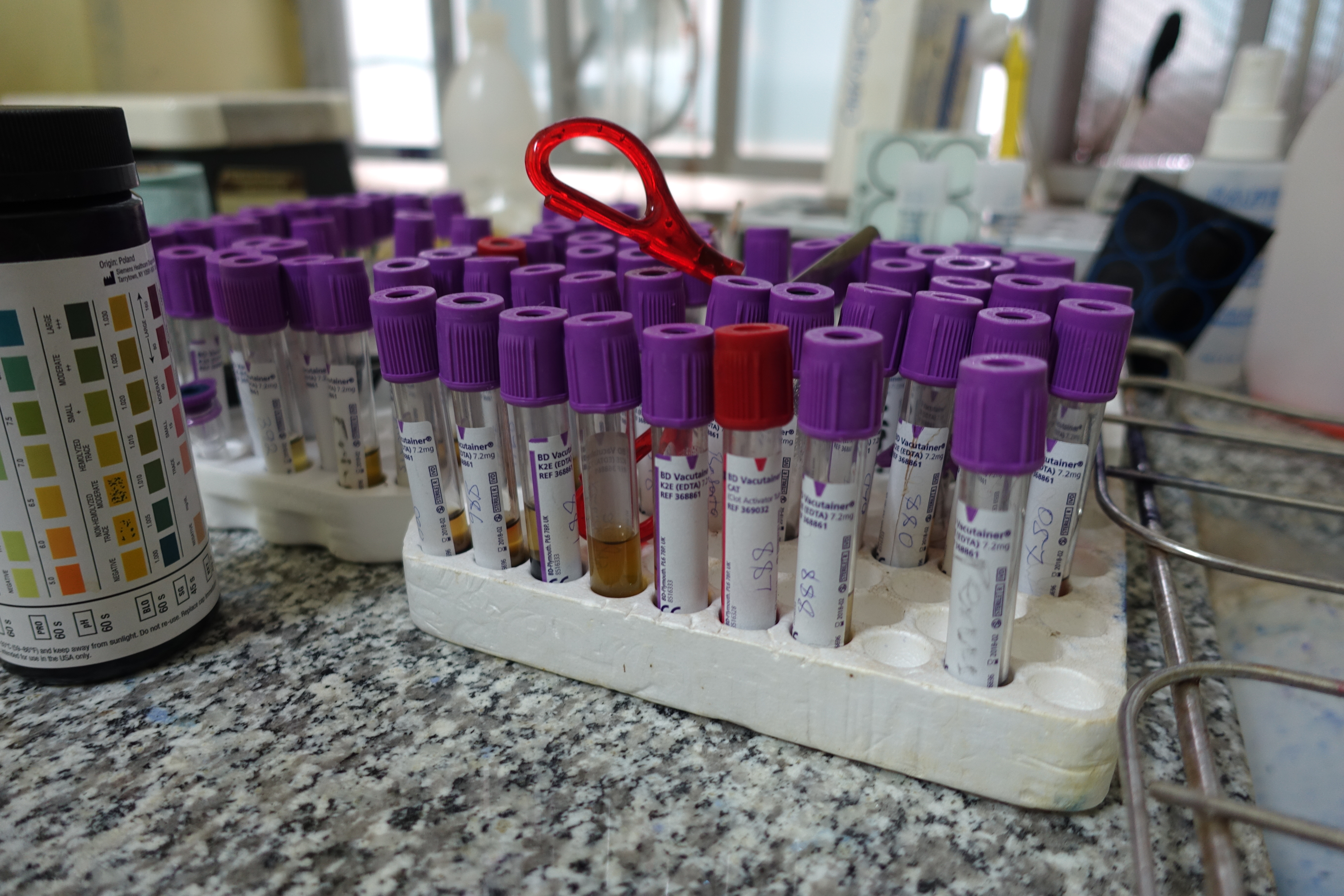 Last Wednesday morning, Kaitlin and I took the three-quarter mile walk on the dirt road from the Guest House to the Health Center for our weekly work rotation. We discussed what we’d be doing that day: the options were Triage (patient vitals), Pharmacy, Dental, or Laboratory. I had so far managed to avoid working in Triage where the other interns are usually assigned. It required close interaction and communication with sick patients and screaming babies and didn’t seem like something I would enjoy. Kaitlin and I agreed that we both preferred to stay out of the Pharmacy because it was boring and our efforts at implementing organization in prior weeks had been futile. I told Kaitlin that today I hoped to work in the Laboratory.

We arrived at the Health Center and were immediately escorted to Triage by our friend, Edward, a social worker and fixture at the clinic. He said they only needed one of us there, and Kaitlin volunteered. He shut the door behind her, looked at me and said, “Do you want to work in the Laboratory?” Yes! I asked him if Kaitlin had told him that’s what I wanted to do or if he had read my mind. He said he read my mind. 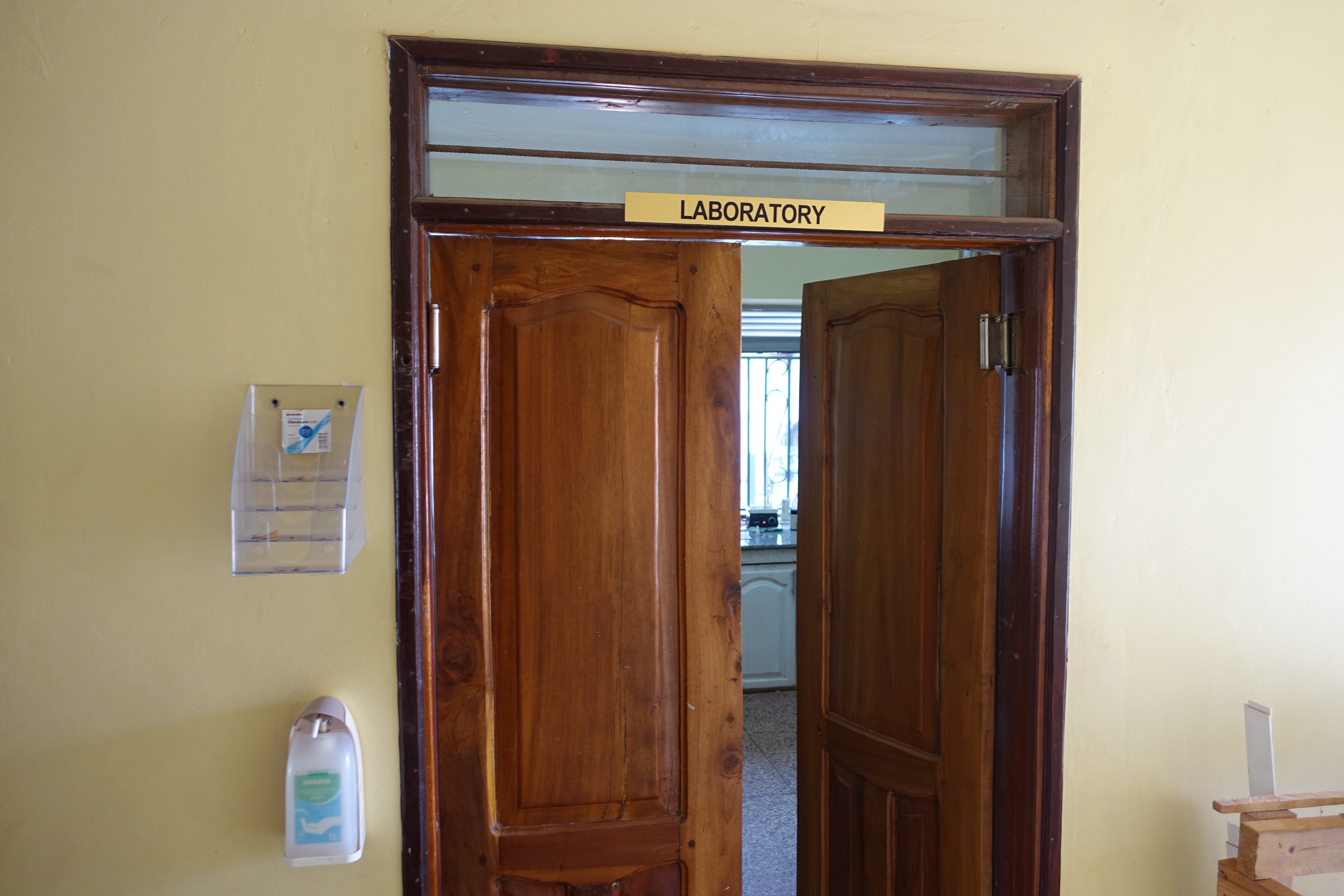 The Laboratory is located at the end of the one-and-only hallway that connects the lower level of the Health Center from front to back. It’s a single room with a solitary fluorescent light bulb hanging crooked on the ceiling. The room combines patient service, sample testing, and results processing. I followed Edward in and saw the back of the lady lab technician turned toward us. Edward asked if she needed help. She said no, then turned around and saw that “help” meant that she was being asked to accommodate a mzungu with absolutely zero laboratory or medical experience. She changed her mind about the help, smiled at me, and offered me a seat in the corner near the computer. She introduced herself as Christine, and believed that was my name also. Close enough.

Christine obviously knew that mzungus are best used for computer work. She showed me how to check for new lab requests, verify that the patient had made payment, note the type of sample taken, and how to input the results. For most tests, there was a drop-down menu where the choices were positive or negative. For the malaria blood slide test, there were several options ranging from ‘no parasites seen’ to ‘malaria ++++.’ She showed me the more complex complete blood count results, which were viewable on the screen of a large piece of equipment that analyzed the blood. There was a tiny printer on the machine that was supposed to print the results which you’d then manually transfer into the patient’s file on the main computer. However, the printer wasn’t working so Christine showed me how to write down the 19 lines of numbers. I suggested we take a picture on my phone. 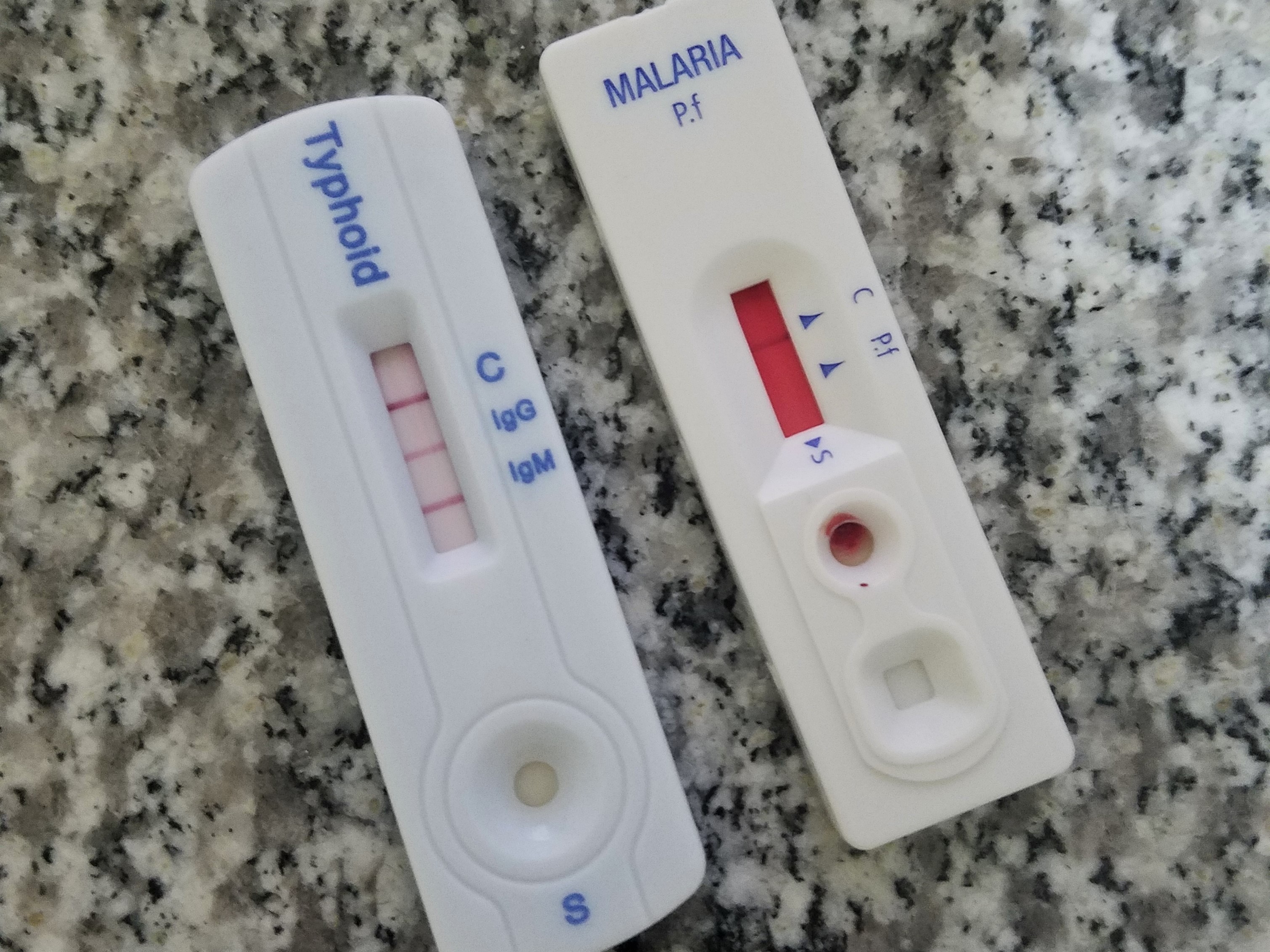 Christine’s job was primarily to draw blood and perform real-time diagnostic tests. I quickly learned that most patients sent to the Lab for blood work are suspected to have malaria or typhoid. The symptoms are similar and seen in tandem enough that many patients are tested for both to ensure the appropriate medication is given. A handful of other infectious diseases are also tested, primarily through anti-body rapid screening tests. Full blood counts are also commonly ordered to check for conditions not identified in the exacting tests.

A large, boxy piece of equipment sat unused on the counter between the blood count machine and the desktop computer. Christine told me it was for blood chemistry, which she said is like cholesterol, liver, and renal tests. However, she went on to say, the Health Center didn’t currently have the resources to implement the software, maintain the mechanics, or in some cases, interpret the results. So there it sat.

The patient reception area consisted of two side-by-side chairs along the wall, just inside the door from the hallway. Usually someone would amble in, seat themselves, and hold out their printed lab order for me to check. I’d tell Christine what we were testing for, verify on the computer that the patient had paid, and mark the sample to be collected. 9 times out of 10, the sample was blood, though it was possible to collect other bodily fluids (such as urine, spit, and use your imagination), as required by the diagnostic test.

A finger prick was all the blood needed for malaria, HIV, and syphilis tests. For typhoid, blood was usually drawn from the vein because greater quantities were needed to separate the plasma using the centrifuge. Children were the exception to the vein draws since they didn’t respond well to needles. Many times I saw Christine milk enough blood for typhoid tests out of the fingers of small children. 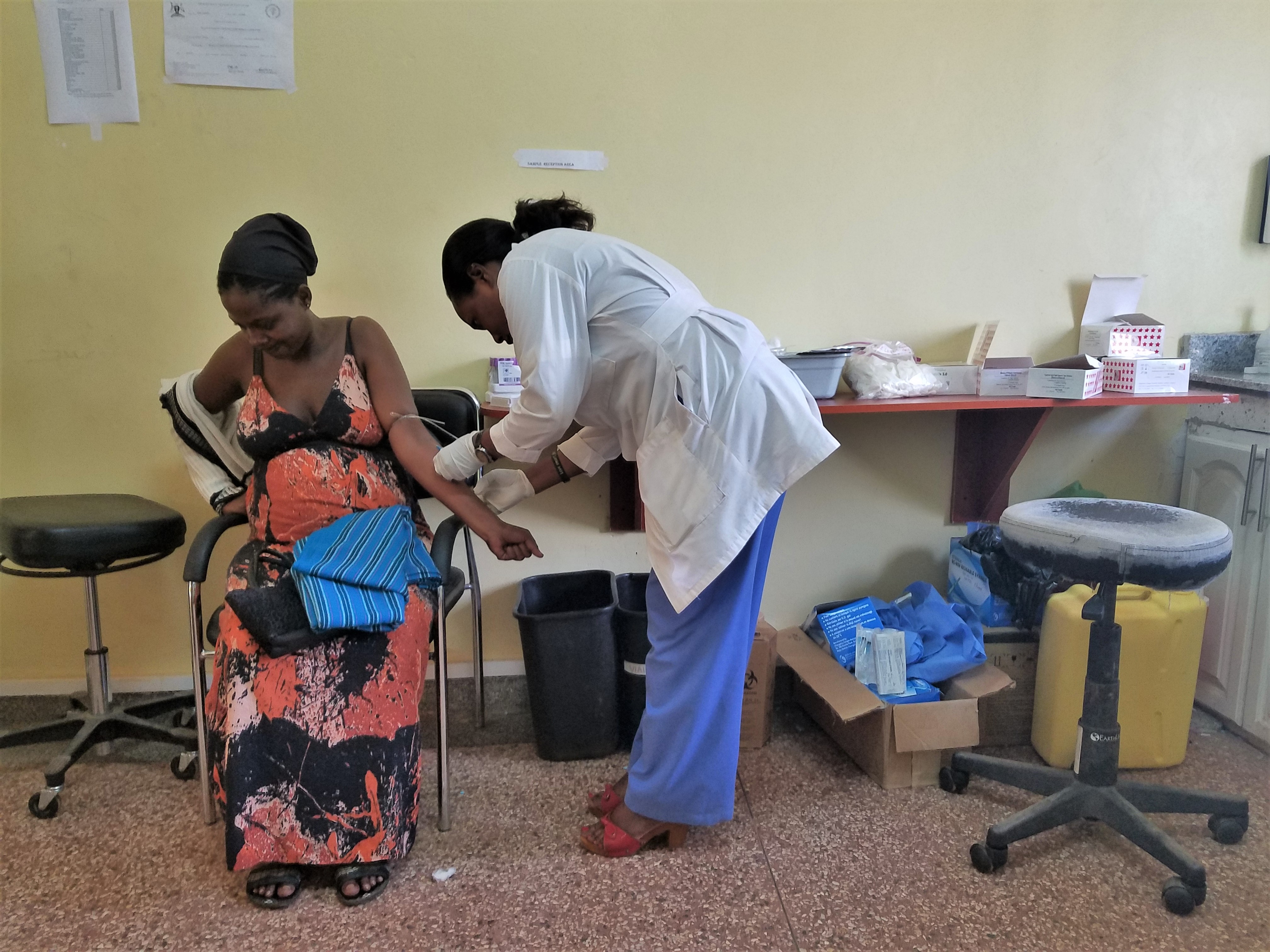 One of our young patients was a nine-year old girl who had to be coaxed into the reception chair by her mother. The girl wore a red dress and hooded sweatshirt. The hood she wore helped cover a large forehead and bulbous skull that was indented behind her jaw. Christine pricked the girl’s finger to draw blood for a both a rapid test and blood-slide malaria test, plus a complete blood count.

The CBC results come back the quickest of the three tests. I entered the girl’s results into the computer and saw off-the-charts abnormalities in her blood, as indicated by the computer screen program that indicated what would be considered normal ranges. Everything that was supposed to be low was high and everything that was supposed to be high was low. Christine explained that this girl had previously been diagnosed with sickle cell and that her blood was abnormal from the disease.

Somehow the girl’s unusual blood also affected the rapid malaria test because we went through two cartridges and neither would produce the single, dark blue line showing a valid test or the second line indicating that malarial antibodies were present. The secondary malaria test is done by looking at blood on a slide under the microscope to see if parasites are present. Christine prepared the slide and called me over to look at it. I peered in and said, “Oh, wow!”, not because I saw malarial parasites, but because there was an explosion of large, dark purple polka dots throughout the circular frame. Christine said these were white blood cells (tinted purple by the stain she used on the slide) and there were many because the girl was very sick from her sickle cell disease.

The girl tested negative for malaria, but after I sent her results to the doctor he must have suspected something else was wrong with her. Later in the day, I noticed that she was back on the patient order listing for another test, this time for syphilis. But she didn’t show as paid in the computer system and I never saw her come back to take the test.

Patients weren’t required to get doctors’ orders for their lab tests. Anyone, including mzungus, can walk in off the street and ask for a test and pay the menu price for it. I thought it would be fun to have my blood checked. Since I was reasonably confident I didn’t have malaria or typhoid or syphilis, I opted for the complete blood count. I walked down the hall to main reception, paid my 5,000 shillings (<$1.50), and walked back to the lab and sat in the patient chair for Christine to draw my blood. When we looked at my results on the screen, Christine said that I showed signs of a slight infection, but was otherwise healthy. I told her I was getting over a cold. 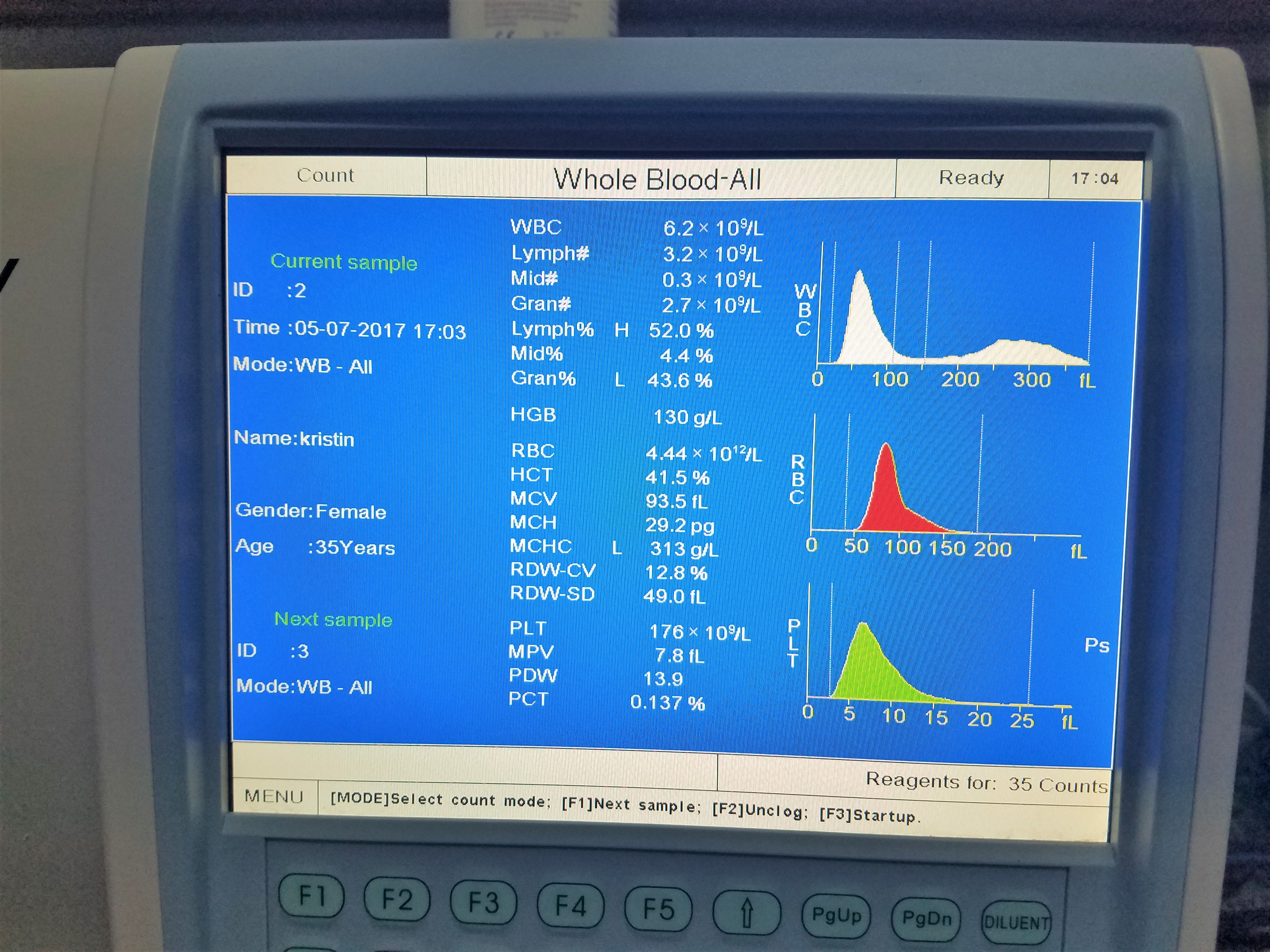 The few other types of tests that Christine performed while I was there included H pylori (which I learned is the bacteria that causes ulcers and is very common in adults and children), tuberculosis, rheumatoid arthritis, pregnancy, and HIV.

The HIV testing process is interesting because it’s illustrative of using the resources available to you in an environment where you are limited by money, access, and technology. Here, it is a three-step process: First you do a rapid diagnostic HIV test.  If it comes back as positive, a different kind of rapid test is done in order to confirm the results. Christine explained that the first test is “sensitive,” meaning it will sometimes show positive for infections that are not HIV. The second test specifically checks for strains of HIV 1 and HIV 2. If the second test is then negative, a “tie-breaker” test is performed. This is a third, somehow different (probably more expensive) rapid test that looks to provide the consensus for one of the two first tests.

Late in the afternoon, one of the few adult, male patients we saw that day sat down in our reception chair. He had come for an HIV test. As with many of the patients from whom Christine drew blood, she didn’t wear gloves when she pricked his finger. As she stood bent over the man’s hand, squeezing out blood into a capillary tube, the guy pushed his arm toward her, causing the tiny prick needle she held to press into her skin. I turned around from the computer just in time to see her jump back from him and start to issue a lecture saying, “Are you a child? What do you think you are doing?”

Christine sent the man away, closed the lab door, paced and then scrubbed her hand. I looked at her finger and I saw a spot that looked like the skin had been nicked, but I didn’t see any blood. I asked her to repeat the whole story about ten times because I couldn’t believe what had happened. As much as I was thinking it, I didn’t feel like it was the appropriate time to point out that she should’ve been wearing gloves. I asked her how you treat accidental exposure to HIV and she said that there is a month-long course of treatment, but that no one goes through the full month because the side effects are so devastating. Hmm. Not as devastating as contracting HIV, I would assume. 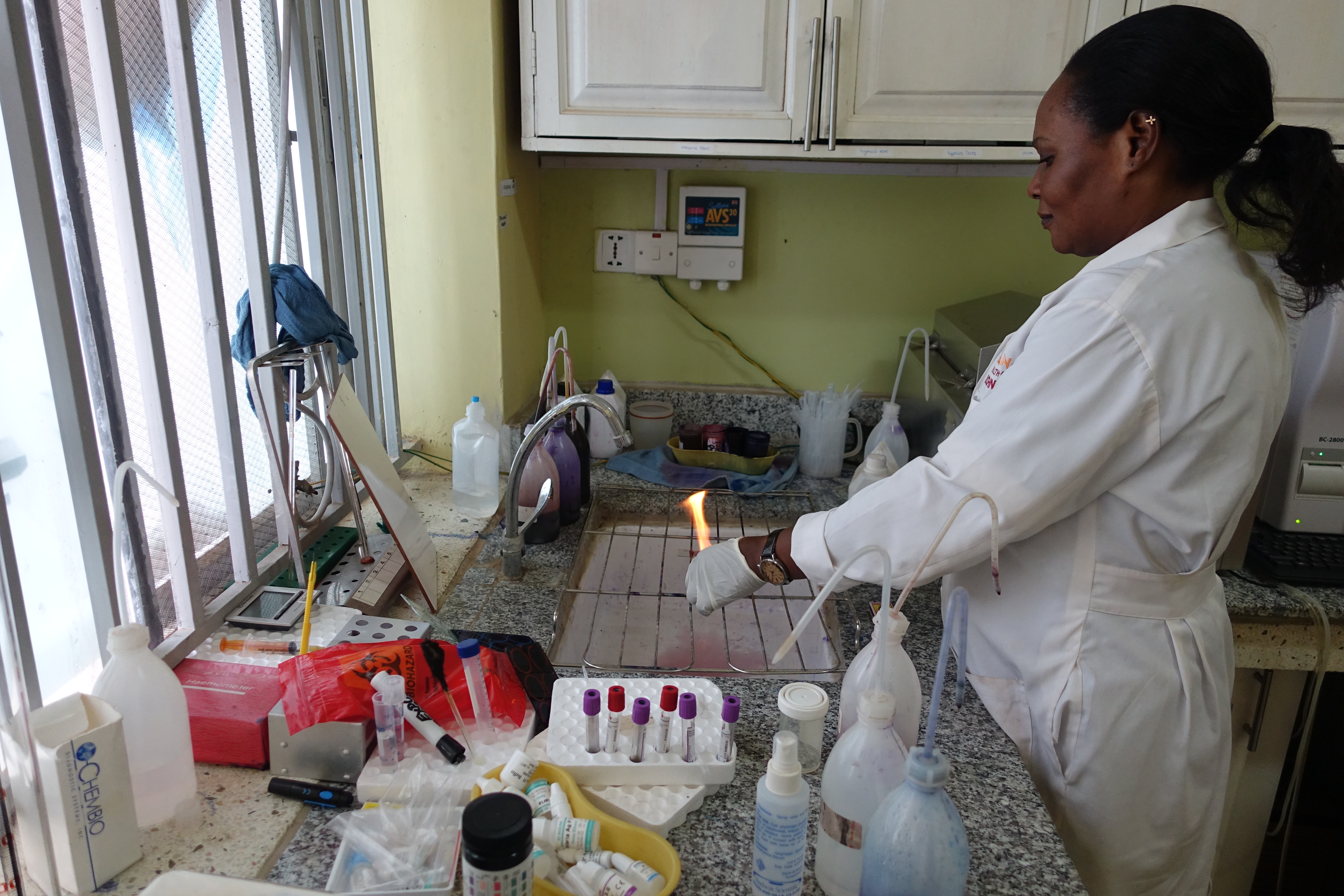 I enjoyed spending the day in the Lab with Christine learning about what she did. She enjoyed my help. I mean my company.

Christine is one of two lab technicians who staff the Lab seven days a week, usually from 8AM to 10PM. She asked me how much money she would make if she lived in the U.S., which led to a conversation about hourly versus salaried compensation—the norm here is salaried pay for most every type of job. I Googled what her comp in the U.S. might be, but the truth is that I don’t think skills between Uganda and the Western world cross-over so seamlessly. Christine is very smart and certainly seemed to be an expert in what she showed and talked to me about in the lab. And I don’t know enough about medicine to say whether her knowledge and experience were commensurate with a similar position elsewhere. Gut-feeling, introducing Christine to the world of U.S. medicine would be a whole new world for her. 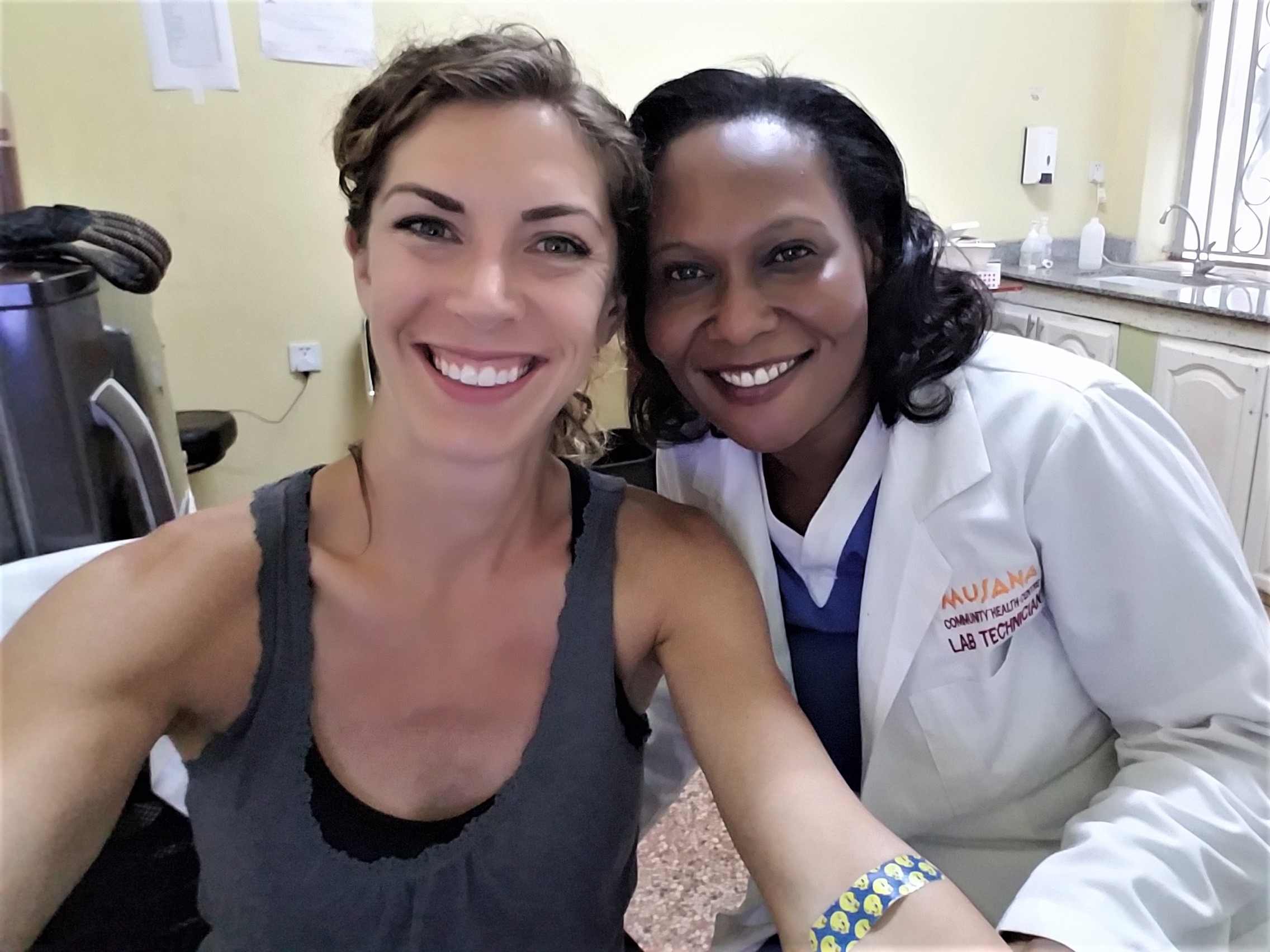 5 thoughts on “THE LABORATORY”