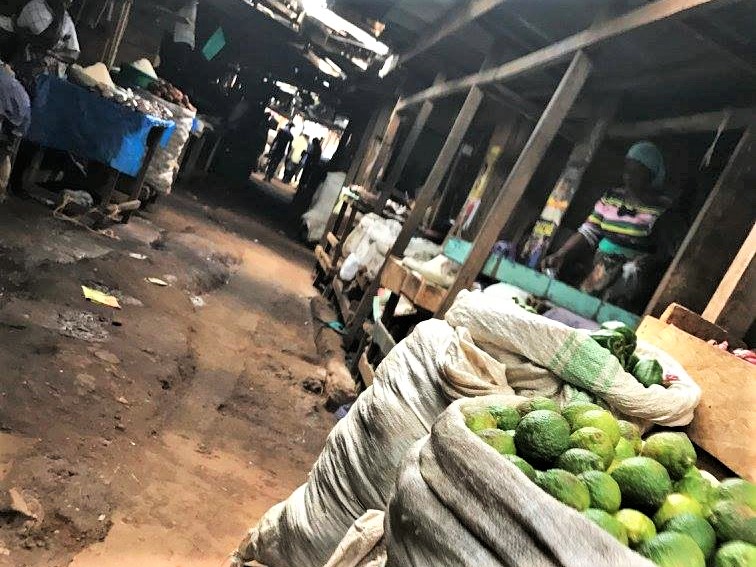 One of my very favorite places in the world is Whole Foods. I love how pretty and inviting it is on the outside with its chalkboard signs and fresh flowers or seasonal displays, how sweet it smells when you walk inside, how fresh the whole fish sitting on ice look, how I can find kefir or a scarf or almond tortillas, and how I can walk five minutes and be back at home. I could live at Whole Foods, but since my budget doesn’t allow that, I purchase specific and unique items, then head over to Sprouts for everything else.

In Uganda, I have two ways to purchase food and goods. One is at the “supermarket,” which is the size of a convenience store with the variety of a condensed Wal-Mart. It has fluorescent overhead lighting and tiled floors. This is where I buy milk, yogurt, hand soap, and, if I were inclined, soda. An Indian, or maybe Pakistani, proprietor mans the counter and takes your cash without any negotiation.

The other means of shopping is at the “market.” The market is one of the movie-set-like experiences here that I’m getting accustomed to: It’s open-air and sits on a large city block hidden behind small structures on all sides. You have to know the location of one of the few tunnel-like entrances to make your way inside.  The market, laid out much like a flea-market, is about the size of a football field and stocked with stall after stall of vendors squeezed together along narrow aisles, under a low, patchwork of an aluminum ceiling. The stalls overflow with fruits and vegetables, grains and sugar, flip-flops and rubber soles for shoes, used T-shirts and newly tailored dresses, and metal cookware and practical tools. On the outer edge of the roofed area is the meat section where slabs of beef hang with flies buzzing all around them and piles of intestines lay on top of counters. Each stall in the market has its own proprietor who stands behind their goods if there’s room, or if not, sits on a stool wedged from the aisle into their rented space. Pricing is variable, though its a full 100% mark-up if you’re white.

The morning of July 4th, I went to the market to purchase supplies for the American holiday festivities planned at the Guest House later in the day. I was in charge of the fresh items for the dishes the intern group was making, which included pineapple-avocado salad, guacamole, and fresh watermelon. I was escorted to the market courtesy of Jim-Bob, the Ugandan driver retained by the Texans. Going to the market by myself was out of the question because of the logistics involved in transportation and communication. Though I would still have to pay mzungu prices, I relied on Jim-Bob to be my token chaperone, guide me to the goods I was seeking, and to translate.

We walked down the aisles, taking wide steps over jutted holes in the dirt floor, and dodging people carrying huge sacks of flour and vegetables on their backs. Jim-Bob helped me buy the huge African avocados: six for 3,000 shillings, which was a good, non-mzungu price. We bought medium-sized watermelons for 7,000 shillings each, which was absolutely a mzungu price. We also got pineapples, tomatoes, onions, and cilantro. Jim-Bob thought I was saying “papaya” when I wanted “pepper” resulting in the disappointment of a papaya vendor to whom I’d been guided. We did eventually find small, extremely hot peppers that cost 1,000 shillings for about a pound.

The quality of the foods varied between stalls, and most items were sold by multiple vendors, creating a true market. Jim-Bob seemed to be taking me to the vendors who sold the less attractive items, which made me wonder if we were going to see his friends or if he thought I was looking to pay the least amount possible.

When I got back to the Guest House, I carried the melons and pineapple in from the van in my arms and unpacked the smaller items from the cotton bag I carried with me. I laid all my purchases out on the wooden prep table in the kitchen. I discovered I only had four avocados. How I ended up with four when I thought I was purchasing six was a true mystery. Mistake or scam, I will never know. However, given the excellent price I would’ve been getting for six, I leaned toward scam. I had gotten jipped out of like $0.70.

The missing avocados were a problem since now I didn’t have enough food to make the planned dishes for the Fourth of July party.

There is a frustration factor for me in dealing with people, prices, and expectations here. As an American purchasing groceries, meals or transportation, I’m used to entering a situation knowing what I want, where to get it, how much it will cost, and expecting it to be delivered on-time and as-requested. At home, these transactions happen either in person or with an app on my phone, and they amount to mindless errands that allow me to multi-task the rest of life’s activities. Here in Uganda, your entire mental and physical energies are spent on the interaction of the purchase, feeling the weight of each vendor’s eyes on you as you debate the economics of your transaction and ultimately knowing you’re paying a premium based on collusion targeted at white people.

Upon hearing about my missing avocados, the other interns reluctantly went back to the market and purchased more avocados—better looking ones than mine—ensuring their chips and guac were a success.

Later in the afternoon, I went to the kitchen to prepare my avocado-pineapple salad. I washed my hands in the sink using dish soap and accepted the newly washed and still wet cutting board and knife that the Ugandan prep cook offered me. Up to this point, I knew that the plates and utensils I used every day were washed in the tap water, but I had been under the impression that any germs that would make you sick were killed in the air-drying process. No, no, the cook told me… the tap water is safe. I wondered why we filled our water bottles exclusively with the filtered water from the tanks in the kitchen. In any case, I figured my food had been prepared this way for the last six weeks and I’d only gotten sick once, so odds were I wouldn’t get sick from the minimal amounts of tap water on my cutting tools and surfaces.

I grabbed one of my two pineapples, put it on the small cutting board, and carved it up in the same way I always carve pineapples. I picked the small, square chunks from the cutting board and threw them into a large cooking pot because there were no bowls to use for my salad. Halfway through my second pineapple, it occurred to me that my fresh chunks on the cutting board surface were now contaminated chunks, not because of the water, but because of the transference of whatever was on the outside of the pineapples before I carved them. At home, I’m very careful about washing everything before it gets placed on the cutting board, mostly thanks to the Rocky Ford cantaloupe crisis. Because of their difficult outsides, pineapples were one of the few things that I was unaccustomed to washing first.

I realized the food safety ship had sailed. Like the tap water, this was probably the exact same way all the other food I had been eating was being prepared. Nonetheless, I decided to take a preventative dose of Cipro before I ate. (I have no idea if Cipro works like that, but it made me feel better.) Next, I cut up the avocado, attempting to keep the skin on a different area of the cutting board than the fruit and failing miserably. I gave up trying to be sanitary after reasoning that even the knife would be contaminated given you are cutting through the skin of an unwashed avocado.

The prep cook was at least concerned about my cilantro. He showed me how to put it on a plate, pour several capfuls of white vinegar on it, and then add filtered water and let it sit. I was careful to wash the knife before chopping. Not that it mattered it at that point. When I got done with my salad, I looked at it and thought to myself that there was no way I was eating it.

The Fourth of July party was fun. The kids from the primary school carried several of the long wooden picnic tables from their dining hall up to the Guest House lawn. The tables were placed into one long line and covered in tablecloths, making it feel all-American despite the African print. We had cornhole games and sangria-pong, though I skipped the pong and went straight to the sangria. Someone contributed steak skewers to cook on the large charcoal grill—they were delicious! I ate the chips, guac, corn salsa, green salad, pasta salad, and s’mores, all the while knowing that each dish had the chance of making me spend all night going back and forth from my bed to the toilet.

The next morning, I was A-OK. So were most of the other partygoers. Sadly, three people (one of the interns, a short-term visitor from Denver, and a Ugandan CDO staff member) had the unlucky bites of cross-contamination. To be fair, the same thing could happen at potluck-style party in the U.S., which is one reason I rarely partake in them. For now, I counted myself lucky that I hadn’t gotten sick and I committed to carrying my Cipro to future outings where food was consumed. 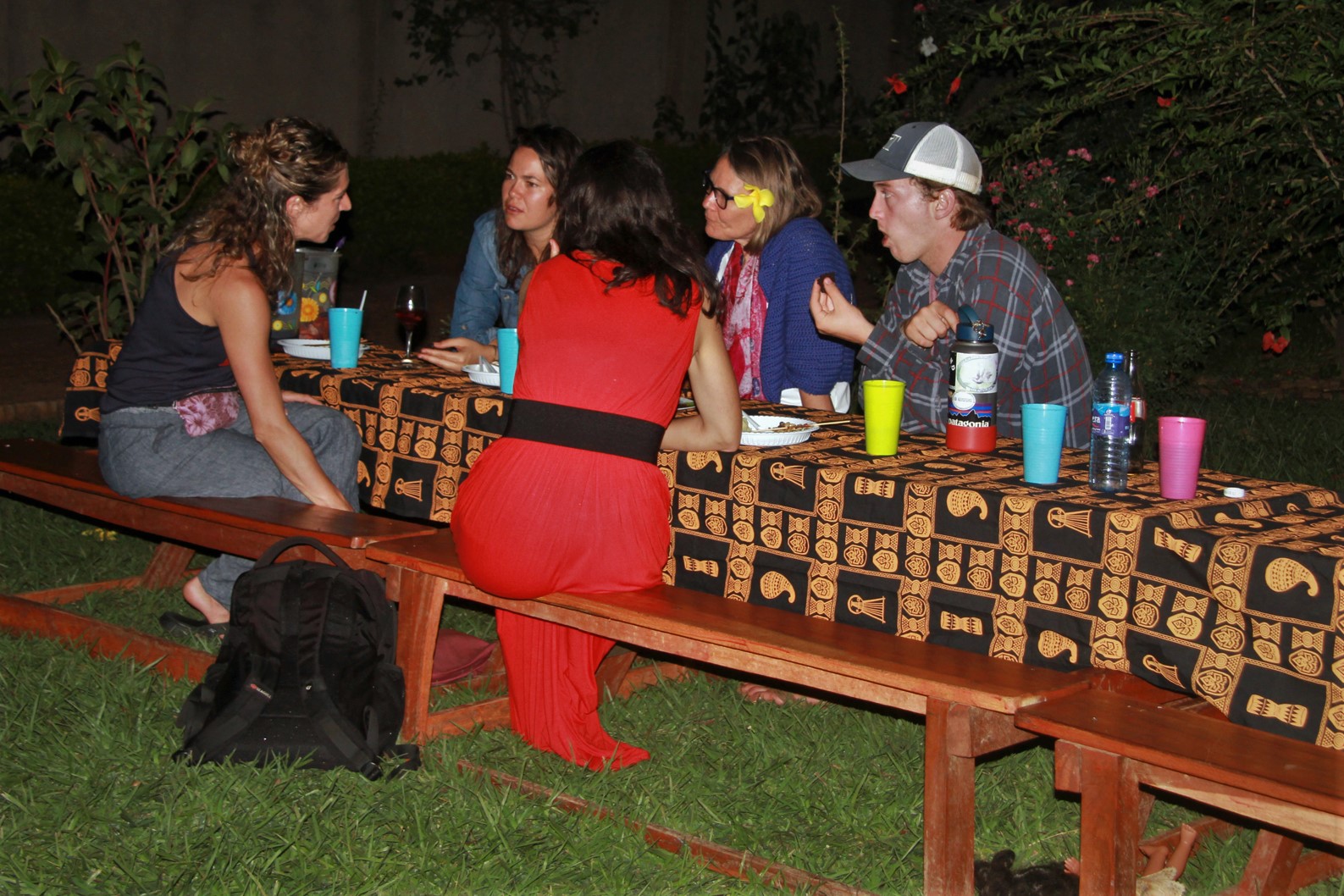 1 thought on “THE POTLUCK”