It’s getting easier to go do things as I get more comfortable navigating the geography and the people.

Since sleeping at the Nile River Camp before rafting last weekend, I wanted to go back to hang out there and enjoy the outdoors, the food, and the river. I hitched a ride into Jinja with a group of Texans who were visiting my CDO. All 11 of us crammed into a passenger van driven by their hired private driver, Jim-Bob. Well, his name is Chimba, but the Texans say it like “Jim-Bob” and that’s what stuck. The public taxis force in about 20 people along with their luggage, wares, children and animals, so really the van full of Texans was a treat.

Activities are prone to run a couple hours behind schedule here, so by the time we got into Jinja we were starving and ready for a late lunch. We ate at a popular restaurant called The Source Café, which doubles as a landmark and bathroom for the mzungus. 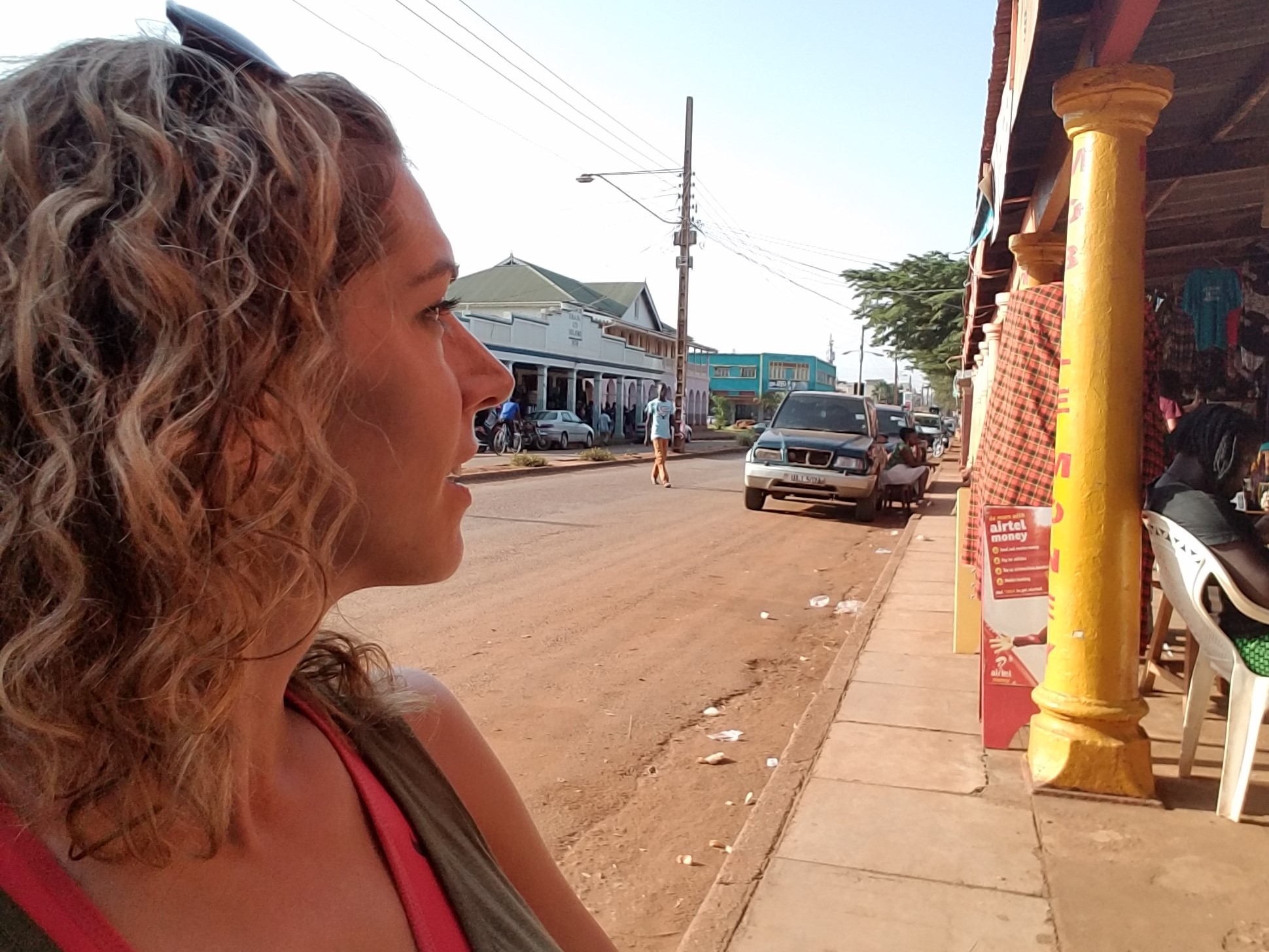 After lunch I did a little shopping. I needed to buy some shorts because all four pairs that I brought had disappeared into the manual wash process back at the Guest House. (They reappeared when I returned.) There’s not exactly an H&M or Kohl’s around here, so I had to pay my 20,000 shillings, or ~$6, to buy a colorful, ultra-thin pair of culottes that were cut off at the mid-thigh. I think I paid $2 too much.

I planned to meet up with a couple from Colorado to ride to the Nile River Camp. While I waited, I went to a literal hole-in-the wall pub next to The Source Café. The outside of this place has a display of clothing, bags and jewelry just like all of the mzungu tourist shops in the area; you have to literally walk into the dark interior to discover that there is a bar, small seating area, and miniature pool table. There is also a table and chairs out on the sidewalk for those choosing daylight. 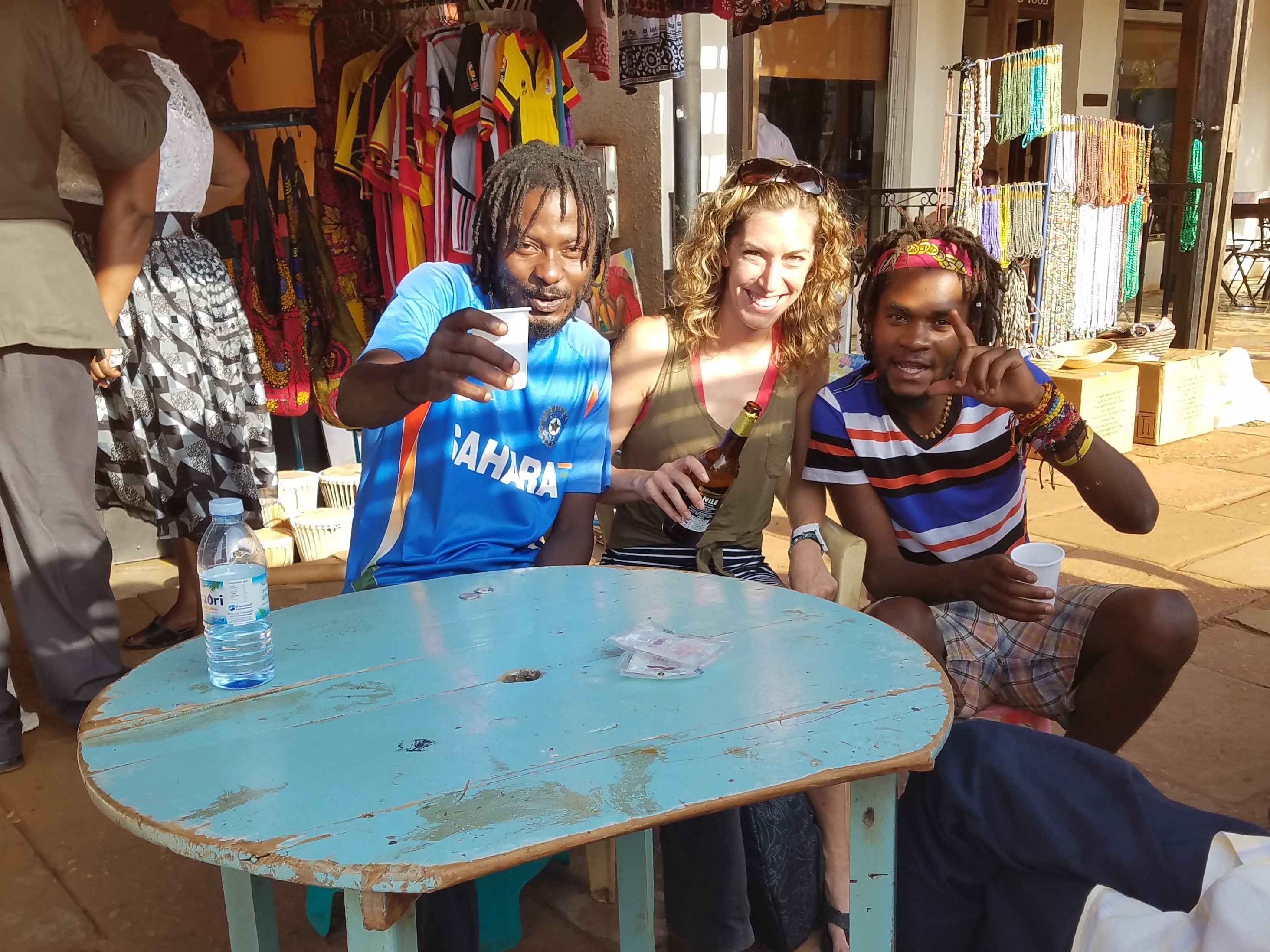 I got my ice cold Nile Special and walked outside to have a seat. This is where I met my pal, T-Bag. Yes, T-Bag like a coffee filter. We confirmed this over and over as other people came by and did introductions. T-Bag is a pleasant, funny, inoffensive young Ugandan who plays reggae music and sells paintings in the alley between the pub and The Source Cafe. We bonded over beers and I was invited to come to a local establishment called The Bourbon to listen to his band. I was also offered marijuana, which I declined by telling T-Bag that I don’t partake in Colorado where it’s legal, so I definitely won’t be accepting any in Uganda. But I did have him buy me a to-go bag of gin because he gets better prices than the mzungu.

After fake promising to go The Bourbon another night, I left in the private-hire taxi to the Nile River Camp. I got there just before sundown, which is always around 6:30 PM here. I met my bunkmates, two girls from Germany doing a medical program in Uganda for a year, then ate dinner in the community bar/lounge/restaurant with my Colorado friends. I ended my night by doing shots of a local gin called Waragi (gin is a thing here) with a Ugandan rafting guide named Jeffrey.

The next morning I awoke before the Germans, departed my bunkroom, and enjoyed instant coffee in the lounge overlooking the Nile River. I ordered a delicious mzungu breakfast, which was the first real, filling breakfast I’ve had the entire time I’ve been here. I also got attacked by bees eager to share my food. 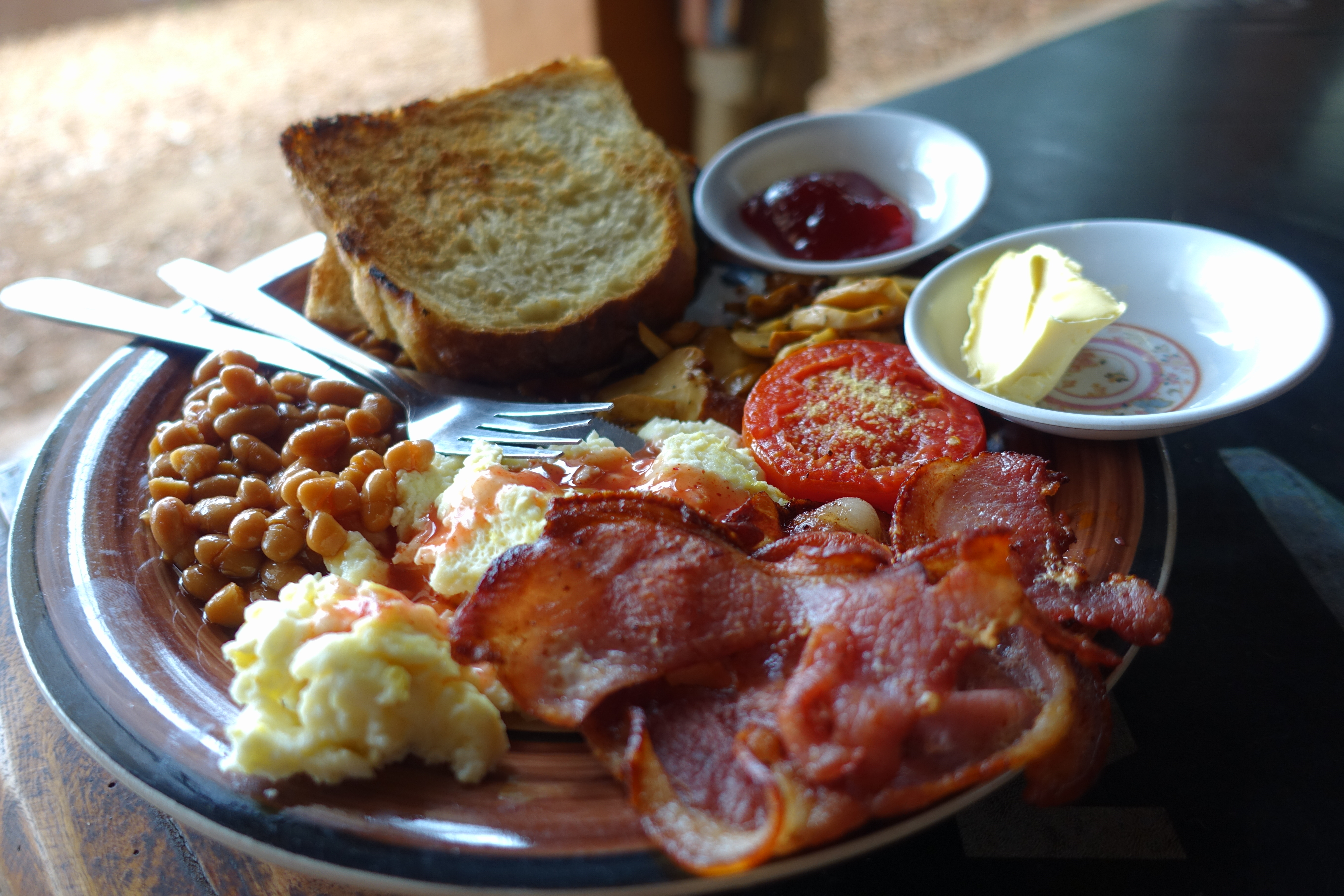 I spent the morning sitting by the pool reading a book and watching the camp’s Vervet monkeys. They are small, feline looking monkeys with long tails and black faces. There was a family of a dad, mom and six babies. They were later joined by their tribe of about 25 other monkeys to play, climb trees, drink from the pool, and clean each other. I could get within about eight feet to take pictures before they would sense my proximity and dart upward. 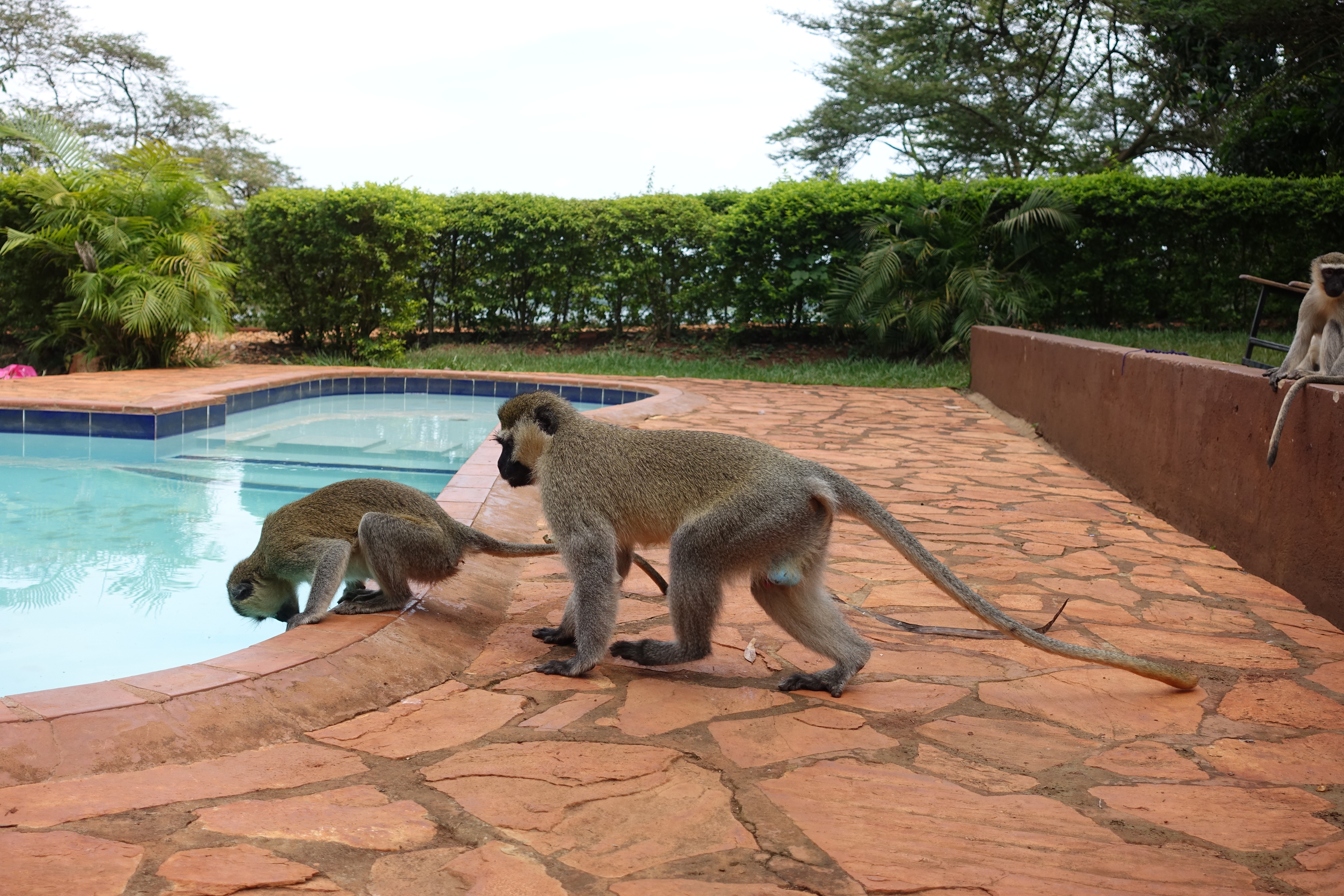 For lunch, I ordered a vegan chapatti stuffed with veggies from a local vendor who delivers for the all-inclusive price of 2,000 shillings, or ~$0.60. I’m still not loving the food options and trying to eat vegetables that aren’t potatoes or corn whenever I can.

In the afternoon, I decided to check out the rope swing. From the camp area, I had to hike down about 30 feet to a steep landing on the side of the river. There you had to use a very long stick to pull the rope back to you. 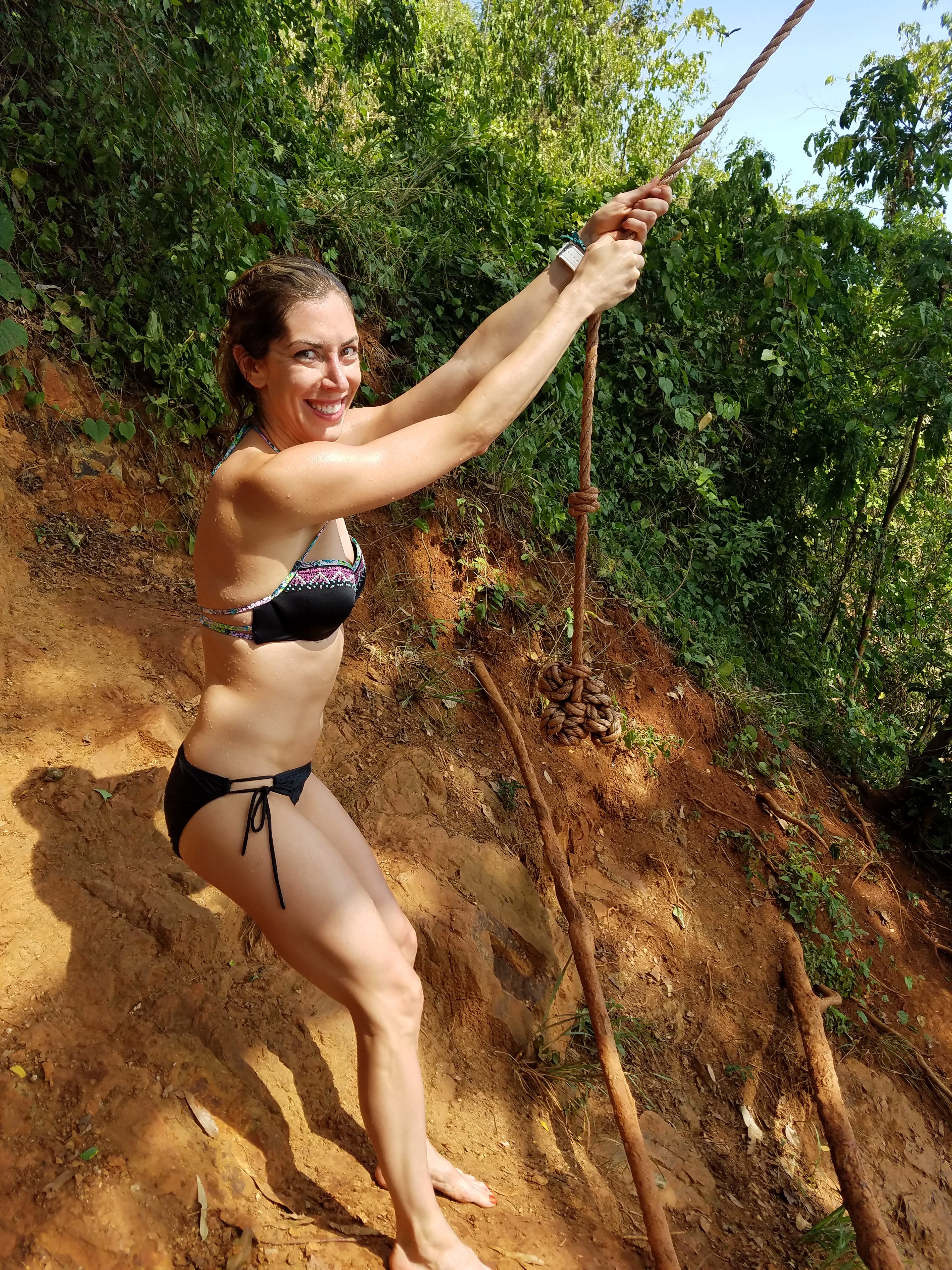 If I hadn’t already been repeatedly tossed in the Nile while rafting, I’d have been afraid of what was in the water. It was brown and I couldn’t see it anything below the surface, which was probably for the best, but it was warm and comfortable. And I ignored the thought of snakes. 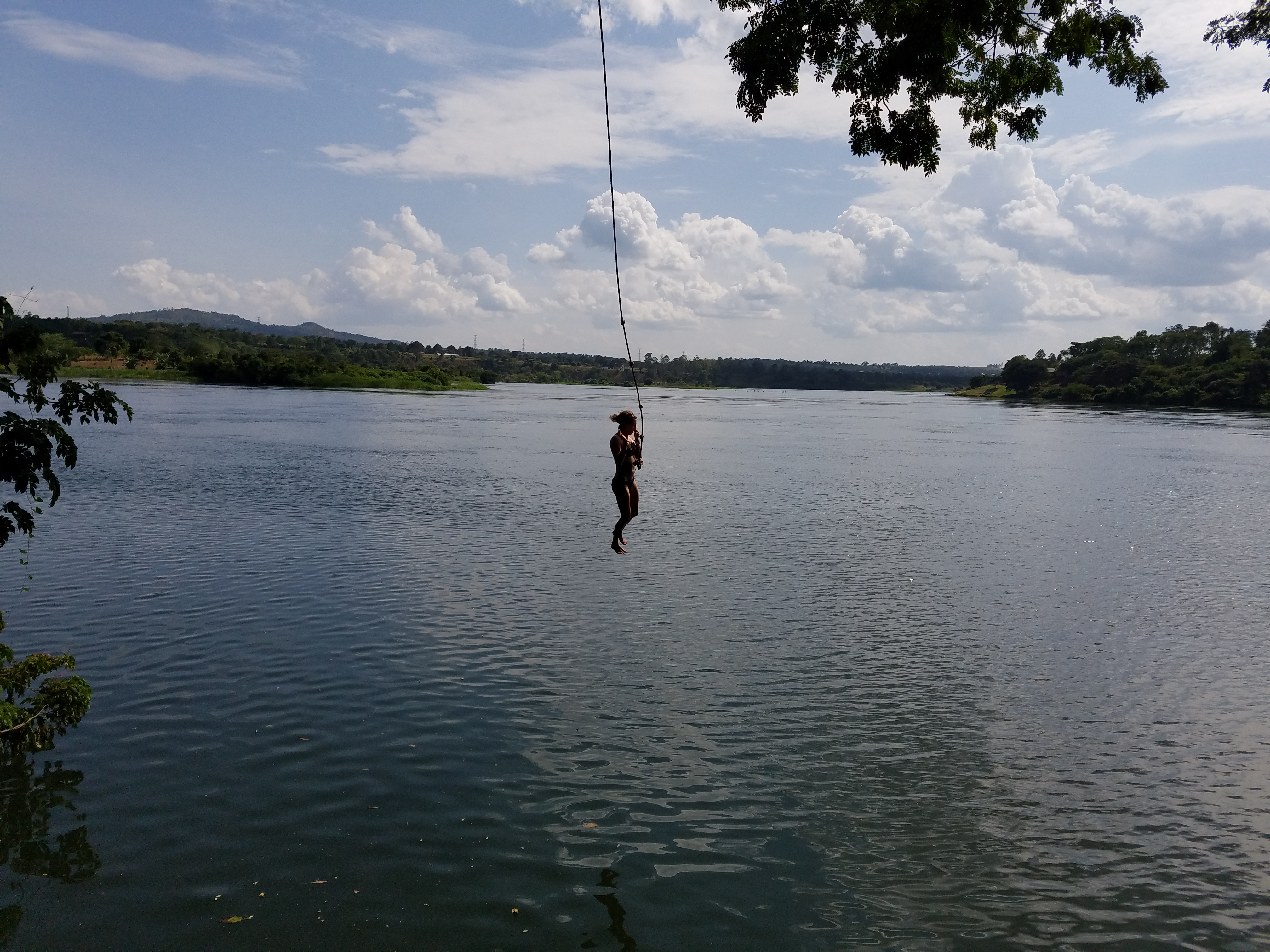 The rope swing might be the very best thing I’ve done on this trip. This was like a legit, jungle rope hanging high above the Nile! Nothing is made of new material here, and this rope was no exception. It was old and frayed and looked like it belonged in this real life Indian Jones adventure. I swung a few times before a Ugandan boy had to show me up by climbing to an even higher launching pad.

I failed to bring shampoo, conditioner, or body soap on my little overnight excursion, so I rinsed off the Nile using shower water in the communal bathroom. I put on the same clothes as I had worn the day before and departed by boda back to Jinja. I met up with T-Bag at his fine alley establishment where we had another Happy Hour, though more subdued than the day before. Joining us this time was a sharp Ugandan named Bosco who walked me to the taxi park and made sure I got the right one back to Iganga.

Back in Iganga, the party wasn’t over. It was the end of Ramadan when the Muslims break their fast. I got dropped off near the CDO’s restaurant and decided to go there for dinner because I had probably already missed it back at the Guest House. I walked in to a larger and louder crowd than I’ve ever seen there. They were eating, drinking (yes, alcohol), and were thoroughly entertained by the projection of music videos on the stage. I ate and then summoned my chauffeur, Richard, to take me back the Guest House.

Hoping for a shower to wash off the Nile, sweat, and road dust, I turned on the water and… nothing. No water. I looked at my plastic, yellow jerry can sitting in the shower and realized that I was going to learn how to use it. But not that night. I was going to bed and all my parasitic Nile friends were going with me.

3 thoughts on “THE WEEKEND GETAWAY”