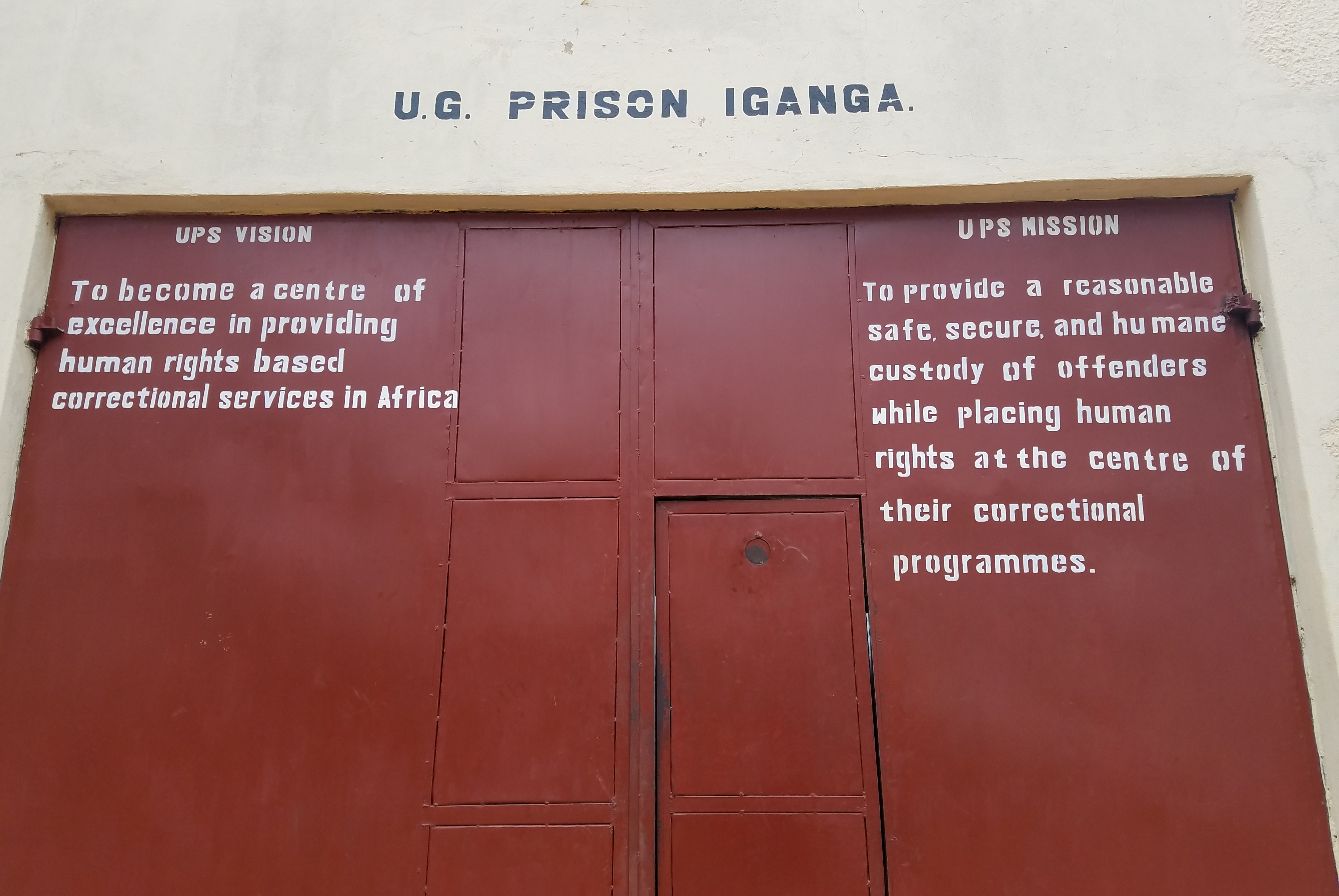 Here at summer camp, one of the optional activities was to go on a field trip to the local prison. The stated purpose of the trip was to hand out women’s hygiene products to the female inmates, but really I just wanted to see what the prison looked like.

The prison is almost disturbing close, located about a 10-minutes’ drive from the CDO headquarters. I loaded into Jim-Bob’s van along with the two other interns and the two remaining Texas. We stopped in town to pick up a local pastor who had the connection with the prison and a woman named Bridgette who managed the hygiene product program. As we approached the prison, it didn’t strike me as all that menacing.  It sat on a well-kept, large grassy campus adjacent to the police headquarters. We drove up to a clean, single-story building with tidy, green hedges and an oversized, burgundy metal door. We unloaded ourselves from the van and left Jim-Bob to guard. There was no handle on the large metal door to pull on or twist, so we knocked as if we were entering Oz. Finally someone creaked open the man door and invited us in. 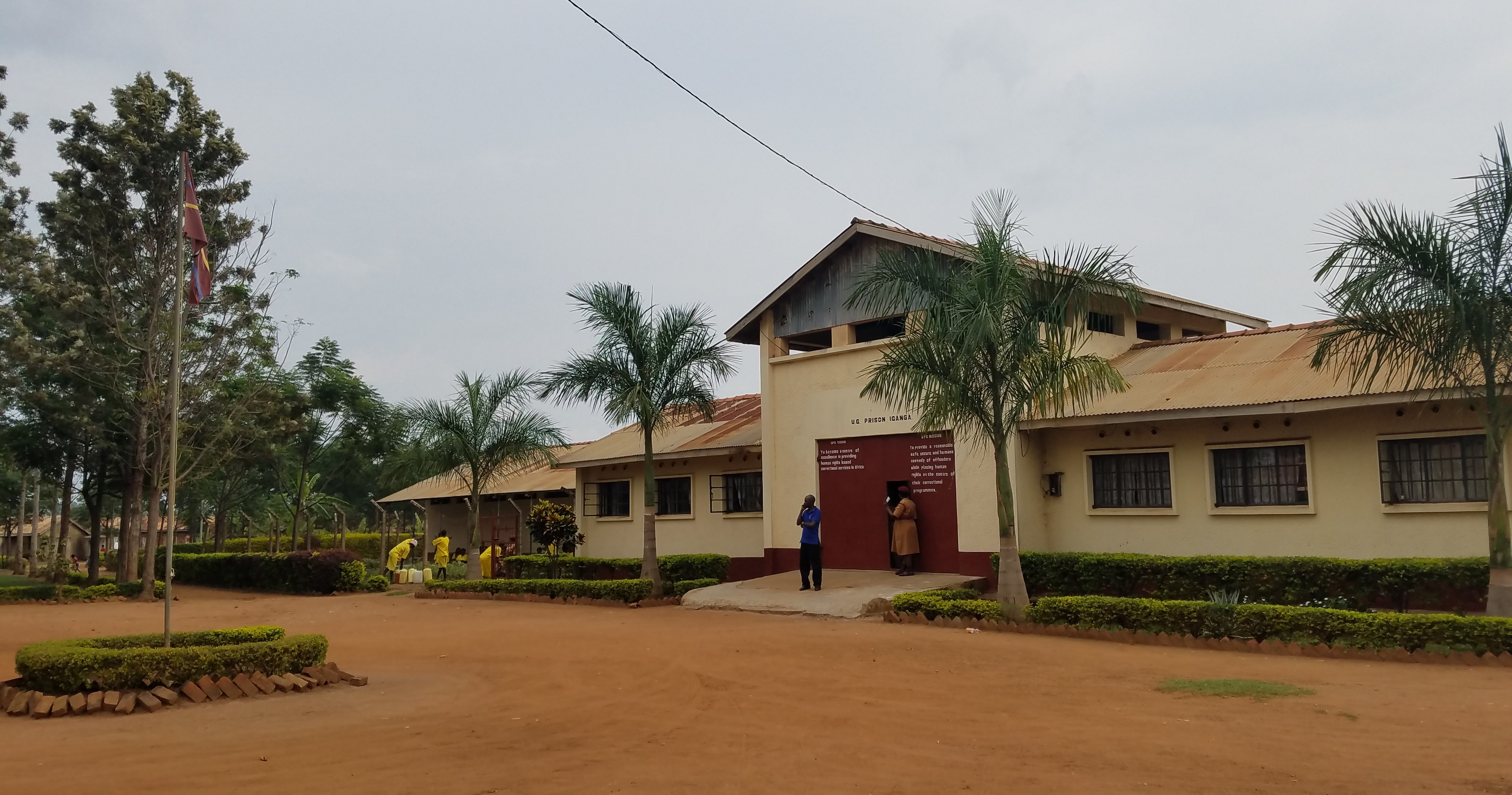 We entered a chamber that left our escape behind us, bars and an open view to the courtyard of the men’s prison in front of us, and administrative offices flanking the left and right. In the chamber, there were guards, as well as a few other Ugandans dressed in street clothes. The normally dressed people, two men and a woman, introduced themselves and explained they were doing ministry for the prisoners. We were escorted into the warden’s office and invited to sit down. Nicolas, a young, string bean of a man proceeded to formally greet us and give us some bullet point facts about the prison: It is the largest prison in Iganga District housing 270 inmates, 23 of whom were women. Crimes ranged from petty to severe, though the murderers were kept separate from the gen pop. The women’s crimes weren’t explained, but we gathered they weren’t too heinous since their sentences ranged from two to five years. We were then dismissed from his office back into the antechamber.

We thought we were headed to the women’s section next, but had to stand around waiting for business to be hashed out. During this time, us mzungus became a show for the 200+ men in loose, bright yellow prison uniforms who were gathered in the courtyard for their church service. Most hung back under the large, shaded cover in the center of the courtyard, but a handful loitered close enough to touch through the bars, gawking at us. Given that we were the ones in the small room with the floor-to-ceiling bars on one side, it felt like we were the animals in the cage, not them. I stood waiting with my arms crossed. Kaitlin, my fellow intern, pulled one of my arms down and told me I had to show confidence when I was in prison.

We finally got clearance to see the women, but had to leave our suitcase of hygiene products, as well as our cameras. We were told the guards would pass out the packages to the prisoners later. Right. We negotiated to bring one package of the washable, re-usable product for demonstration purchases, and were escorted out the front man door and around the side of the main prison.

The women’s area looked more like a large chicken pen then it did a place that people live out years of their lives. It was surrounded with an 8-foot tall chain link fence and some sad barbed wire. Inside was a row of baby vegetables working to grow and the typical smattering of plastic jerry cans, plastic bowls, and miscellaneous laundry drying on the grass and hedges that is common in most residential areas. Fittingly, there was a mother hen leading a parade of a half-dozen tiny chicks through the yard. The dormitory was a rectangular structure with just one door on the end nearest the entrance; we couldn’t see inside. As poor as this scene sounds, the accommodations were not unlike what you see up and down many of the rural roads around Iganga—the exception here being the confinement.

We were invited to a patio area that consisted of a slab of concrete under an awning on the front side of the structure. There was a single bench where we were instructed to sit, though it was clearly not large enough for all of us. The inmates, wearing their yellow prison dresses, sat on the concrete and eagerly awaited the mzungu show.

The inmates ranged in age from 17 years to 60s. Two of them were nursing small babies; it was explained to us that the babies were allowed to remain with the mothers as long as they were nursing. Some women had their hair very short, as is the usual style to maintain sanitary conditions, while others’ hair had been semi-recently plaited with braids or with straight and colorful styles. The women were healthy in the sense that they were clean, looked like they had plenty to eat, and had no obvious illnesses.

A quiet, petite Ugandan woman name Beta (like the fish) from the local ministry visiting the prison acted as a liaison between our group and the women. She and Bridgette translated some introductions and we received a welcome of songs and smiles. Beta prayed. Then Beta preached. She was dramatic and loud and physical in her voice and movements. I couldn’t believe so much sound came out of this small woman! After a month and a half of wishing the Ugandans would speak up so I could hear them, I wished she’d take her volume level down about six notches. Bridgette translated from Lusoga to English, but it was useless to try to hear over Beta.

Most of the time Beta was bellowing, I studied the means of confinement. Really, the prison was totally escapable. It would be no problem at all to climb the chain link fence, wilted as it was, and pop over the droopy barbed wire. Or have a couple people lift you with a hand stirrup and pull yourself into one of the trees that hung over the fences into the women’s prison yard. Or just climb right over the metal gate that had nice footholds and nothing but a few short, pointed pieces of metal at the top. There was no main gate closing off the prison property to the road, at least that I saw. Granted, the prison was a little set back from the main roads, but we’re not talking about a dead zone with landmines that discouraged escape. I suppose you could probably be shot if you tried, but I feel more like the inmates just didn’t really care enough to escape. For one thing, the conditions on the outside were not significantly better than inside. For another, the Ugandan culture is so community based that it would be difficult to escape and then go live in isolation. You’d almost have to return to your community for money and support, at which point you’d be caught. And I’m guessing the penalty for prison escape is substantially more severe than prison itself.

When the preaching was apparently over, Beta worked on some healing. One inmate had a back ailment and held in table-top position as Beta pressed her full weight into the woman, thundering healing words. She followed this show by touching, in turn, a head, a shoulder, a hip, and a heart and closing her eyes and praying loudly. Bridgette stopped translating during this time; we were unsure if Beta was still speaking Lusoga or was speaking in tongues. Kaitlin informed me that Beta was downright Pentecostal. 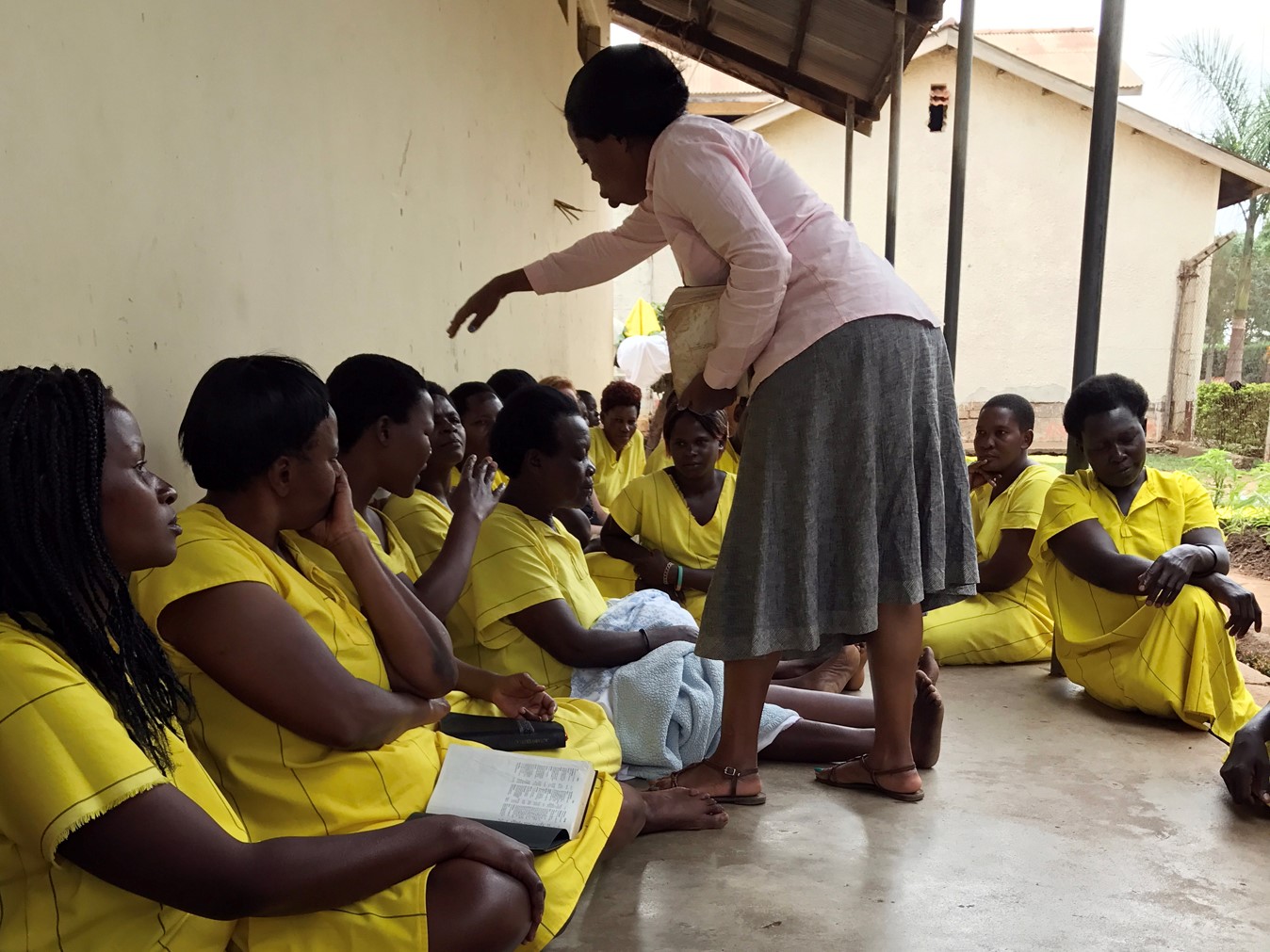 Then we got to the main event: the demonstration of the American-made, individually and attractively packaged set of fabric sanitary pad holders, several washable, absorptive cloths, and a couple pairs of underwear. Bridgette assembled the holders and cloths and showed the inmates how it snapped in place around the underwear. Honestly, this was the most brilliant product that I’d never seen before—someone is going to make a fortune selling these to the environmentally conscience consumers on the U.S. market.

The inmates figured out that we didn’t have any more than the demonstration products with us and became visibly upset. Our head Texan, a fiery little lady, decided that she was going to go back to the suitcase we’d left behind in the main antechamber and get the packages. She and a couple other mzungus marched out and quickly returned with their arms full, having not been confronted by the guards who previously restricted the gifts. The brightly colored, fabric drawstring sacks were passed out according to size to all 23 inmates, to the lady guards who seemed to appear out of nowhere, and to every other woman who was remotely related to the prison operations. A guard near me pointed to a lady guard some distance away, walking near the perimeter of the prison and carrying a rifle. I was told she wanted a package. No problem, we’d be happy to give her one. We’d come with 50 packages and left with something like 19, making the cost of doing charity 25%-30%. 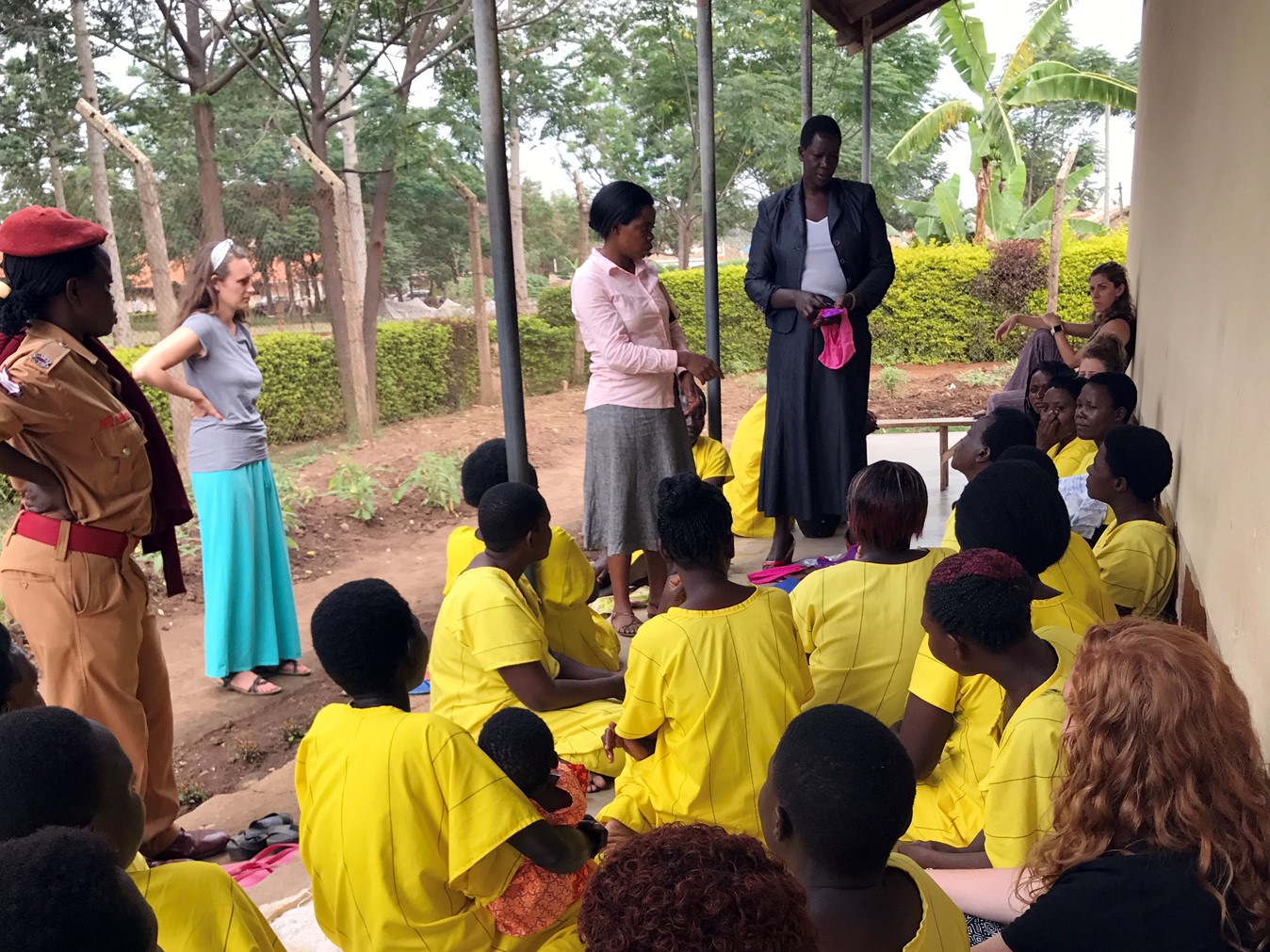 The justification for imprisonment of anyone in Uganda is questionable. The court and prison system is as corrupt as everything else as around here. The 17-year old girl in confinement told us that she was there because her boyfriend’s mother had arranged it; she didn’t know what charges against her were and she was still awaiting her time in court. Another woman told us that her crime was that she hadn’t paid back her bank loan. We have no way of knowing whether these stories are true—they could’ve been fabricated to get our sympathy and gifts. We left the prison knowing that the inmates and the guards had been treated to the exact same generosity on our parts, which is all you can do.

We’d been told that picture taking wasn’t allowed at the prison. Nonetheless, the head Texan managed to sneak some pictures on her iPhone. I snapped a couple from the safety of the far side of the van right before I stepped in to depart, instructing Jim-Bob to burn rubber!

6 thoughts on “THE WOMEN’S PRISON”